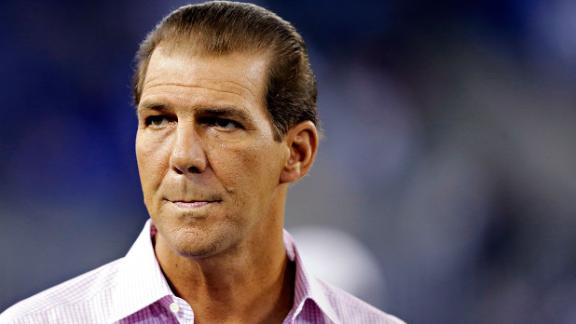 OWINGS MILLS, Md. -- The yearlong Ray Rice scandal and multiple arrests within the Baltimore Ravens organization weighed on owner Steve Bisciotti more than any other season.

It was so tumultuous that Bisciotti joked about being on "suicide watch."

"It was my worst year as an owner," Bisciotti said Tuesday at the annual State of the Ravens news conference. "I had 14 good years, and then I had an absolute crappy year."

It was a year where Bisciotti had to defend the reputation and integrity of his organization. Five players, including Rice, were arrested last offseason, and director of security Darren Sanders was charged with a sex offense.

"Things come in waves, and we certainly took a crash here last year," Bisciotti said. "We're a team and an organization that cares obviously about our reputation. When it takes a hit, then you examine what you do. In order to take a hit to your reputation, you have to have a pretty good reputation to start with, and we did. Now it's about proving that it was an aberration. We believe that to be the case."

Bisciotti, who once said he would be happy to be the least-known NFL owner, found himself in the forefront of one of the biggest stories in sports last year with the Rice scandal.

He held a news conference to deny an ESPN report that the team orchestrated a cover-up over the Rice domestic violence case and asked the NFL for leniency when handing out the suspension. He also apologized in a letter to season-ticket holders, suite owners and sponsors for the organization's mishandling of the Rice situation.

On Tuesday, general manager Ozzie Newsome said the Rice scandal will affect which players Baltimore acquires in free agency and the draft.

Bisciotti, though, isn't second-guessing himself or the organization.

Bisciotti said the Ravens' success and the offseason meetings to plan for the 2015 season bolstered him after a troublesome year.

"I am off suicide watch," Bisciotti said. "I'm stable mentally. I'll probably be your owner for a while."