The good, bad and ugly of 76ers-Celtics opener 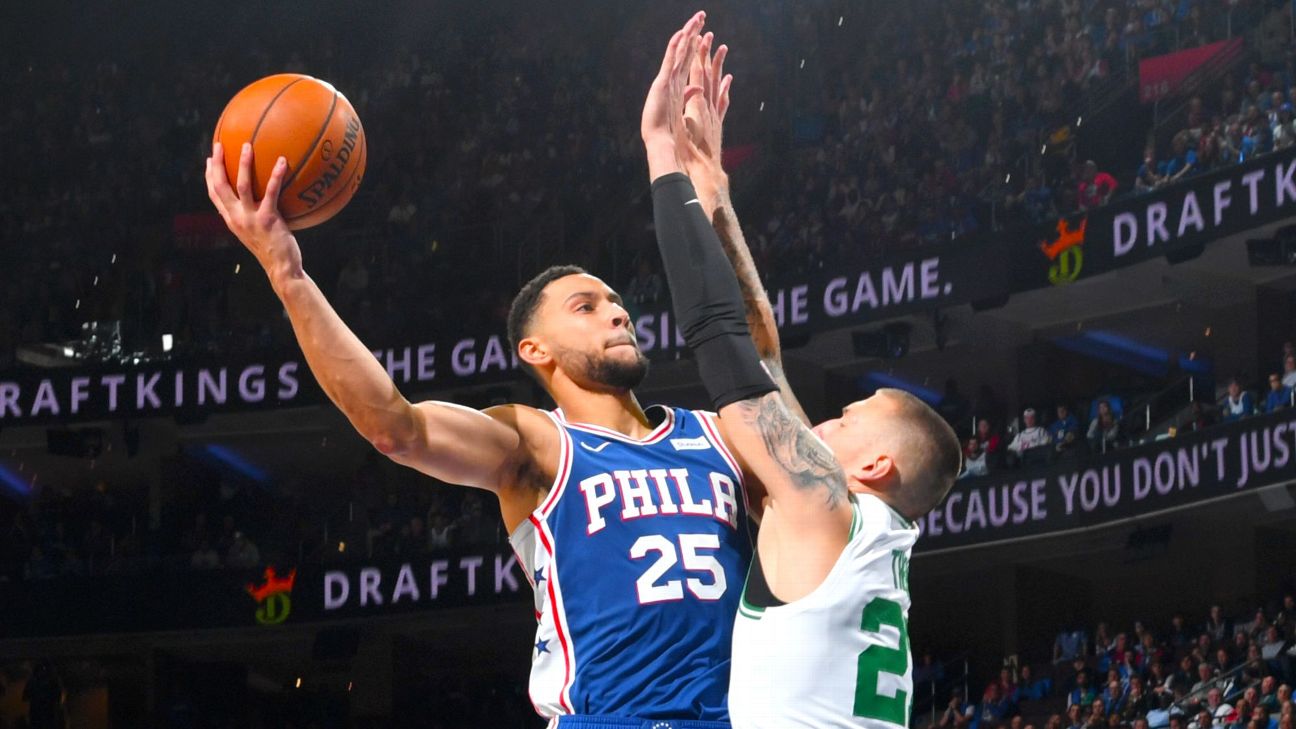 ESPN
By Tim Bontemps
PHILADELPHIA -- The Philadelphia 76ers spent the offseason building a team focused on a very specific identity: being big and physical and imposing their will on their opponents at both ends of the court.

And, if Philadelphia's season-opening 107-93 victory over the Boston Celticsat Wells Fargo Center on Wednesday night is any indication, that blueprint is going to lead the Sixers to quite a few wins.

"Overall the mentality was to go in and [play] 'smashmouth basketball,' as coach says, and I think we did a pretty good job," Sixers forward Matisse Thybulle said. "We always have room to build, but to set the tone, this way was really good for us."

Though the Celtics boast a roster that includes an All-NBA point guard in Kemba Walker, a former All-Star in Gordon Hayward and rising youngsters in Jayson Tatum and Jaylen Brown, they continually looked flustered. They forced contested jumpers. In the rare instances they got an open look, they appeared to rush their shot in fear of losing the space that they'd so briefly created.

"We just tried to make it tough on them every trip down," 76ers guardBen Simmonssaid. "You know, they have a lot of talented guys and we were just trying to make sure they had tough shots. I think everybody did a solid job of that."

Simmons did notattempt a 3-pointer, but he set the tone for the Sixers offensively, going for 24 points, 8 rebounds and 9 assists in 35 minutes. He pushed the ball upcourt whenever he had an opportunity, resulting in several easy buckets in transition. The Celtics tried several options to slow him down, but none of them worked.

"He is just so gifted physically, but it's also his mentality," Sixers coach Brett Brown said. "You take that 6-[foot]-10 body and that athleticism, that physical tank-like mentality, and it's an alpha combination.

"He was trying to put his thumbprint on the game from a physical standpoint."

The same could be said for the rest of his teammates. It wasn't a perfect or pretty game, but there won't be many of those involving the Sixers this season.

There will, however, be plenty of wins.

Yes, the Sixers won this game and can probably win a lot of games shooting this way, given their size, strength and physicality.

Philadelphia outrebounded Boston by 21, outscored Boston 58-44 in the paint and held the Celtics to an abysmal 36.7% shooting performance overall, including 7-for-26 from 3-point range.

But if Philadelphia wants to win a title this season, it probably will have to shoot better than 24% from 3-point range to do so.

"On offense, we missed a lot of shots," Brown said. "I loved the fact that we got to the free throw line as much as we did, and I liked the war of attrition.

"We were trying to play as physical as we could and put them in foul trouble. Had our defense not been our defense, we might have seen a different result."

The problem for the Sixers is that it's hard to see where that shooting is going to come from. The bench is full of streaky shooters like Mike Scott and Furkan Korkmaz, and Thybulle isn't yet a reliable option from deep.

Al Horford and Josh Richardson went a combined 1-for-10, something that shouldn't happen all that often, but they also aren't likely to go 5-for-10 very often, either.

This was the thing the Sixers came into the season knowing would be their biggest issue (aside from health). And though they won Wednesday night, they were given a clear indication it is going to be something they have to address at some point.

Matisse Thybulle is endearing himself to Philadelphia

Throughout the preseason, Thybulle has received plaudits for his immediate ability to impact the game defensively. He quickly showed why.

The No. 20 overall pick scored only three points in 21 minutes, but he had two steals, two blocks and effectively hounded Walker whenever he was on the court.

"It was intimidating at first, to think this is someone I have watched for years, played as on NBA2K, so I know what he's capable of," Thybulle said. "Then to get out there and guard him mano a mano was a pretty cool experience. But it was also good for me just to see how I matched up against one of the best in the league."

Thybulle quickly got yanked out of the game after Walker suckered him into two fouls in about 10 seconds, but the rookie improved as the game went along, stealing the ball from Walker on one play and blocking his shot on another.

It was just the latest impressive display from the former Washington star, who was the Pac-12's Defensive Player of the Year each of the past two seasons. He even managed to throw in a 3-pointer in the fourth quarter, one that he almost flung at the basket as Walker crowded his space in the corner in front of Philadelphia's bench.

"I'm not sure how that one went in, but I think it was a foul," he said with a smile.

The Sixers will need Thybulle to be able to knock down an occasional 3-pointer or two to alleviate some of the shooting issues they have and also to ensure he can stay on the court. But his defense is already earning him some rare comparisons.

"I've not seen a rookie come in with his defensive skills and that's impressive," Tobias Harris said. "The only guy I would say is Kawhi [Leonard], coming in as a rookie, everybody knew he was a top defender."

To say the Sixers are happy with their selection with the 20th pick in June's NBA draft -- a pick that came, by the way, in a trade with these same Celtics -- is an understatement.

Kemba Walker will have better nights

This was not the debut in a Boston uniform Walker was hoping for.

"It felt good," Walker said of making his Celtics debut. "Just a little bit disappointed obviously. Tough night for many of us, but me personally, I just wish I could have done a lot more and played better for these guys.

"But you live and you learn. There's nothing you can really do but try and get better for the next one."

It will be hard for Walker to be worse. He finished the game 4-for-18 from the field, including 1-for-6 from 3-point range. He finished with 12 points, 2 assists and 3 turnovers in 34 minutes.

Walker, like the rest of the Celtics, never looked comfortable against the enormous Sixers. Last season, he dropped 60 points on Philadelphia, which routinely struggled to guard small attacking players like Walker. That doesn't look as if it will be the case this season thanks to the presence of Richardson, who had a phenomenal defensive game, and should be in contention for All-Defensive Team honors this season.

There's no doubt Walker will be much better than he was Wednesday on many nights this season. But for someone who spoke at Wednesday's morning shootaround about how excited he was to open the season on national television, something he'd never done before, this was a disappointing start to his time in Celtics green and white.

Tatum had a clear goal coming into this season: average at least 6 3-pointers and six free throws attempted per game, turning his shot chart into a more modern-looking one.

From that standpoint, Wednesday's game was a mixed bag.

There's little doubt Tatum was aggressive in this one, finishing with a game-high 22 shot attempts -- including going 4-for-8 from 3-point range. But going 4-for-14 from inside the arc is not exactly what Boston will be looking for from him, to say the least.

Still, Tatum made decisive moves, and did his best to attack Philadelphia's imposing size and length -- though, at times, it would've been more prudent for him to move the ball elsewhere. And while he took only three free throws, that attacking mentality will lead to more attempts from the line if he sticks with it.

"I don't think anybody was nervous," Tatum said. "It was just one of them nights. Like, I felt like I couldn't throw a rock in the ocean."

The same could be said for the rest of his teammates. But if Tatum continues hunting for shots the way he did Wednesday, his goal will be well within reach.

Al Horford adds a new twist to a classic rivalry

That is what made it all the more amusing for him to be thrust into the center of one of the NBA's most enduring rivalries when he chose to leave the Celtics for the Sixers as a free agent this summer. And on Wednesday night, Philadelphia did its best to play that up.

The Sixers designated Horford as the "bell-ringer," the person who comes out and hits a replica of the Liberty Bell, in what was thought to be a first in terms of having an active player do the honors. Then, during the game, Horford was wildly cheered by the crowd every time he touched the ball.

"It's still very weird to me," Horford said of playing against the Celtics. "It felt good to go out and get a win and just kind of [have a] 'It's finally over' type of thing. ... I [had] a lot of emotion leading up to this, so I'm just very happy that we came out, we competed, and we were able to get this first win."

It was a typically understated performance from Horford on the court, but he slotted into Philadelphia's system perfectly, adding his elite basketball IQ and defensive capabilities to a team already stuffed full of it. And while Philadelphia needs him to do better than that 1-for-6 from 3-point range, Horford gave the Sixers exactly what they thought they were getting when they got him away from Boston this summer. 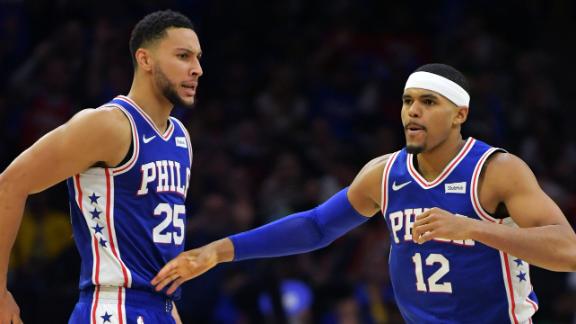 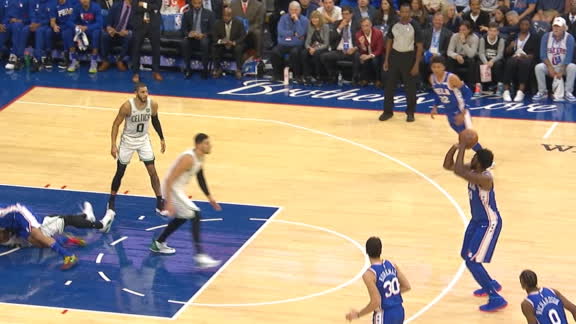 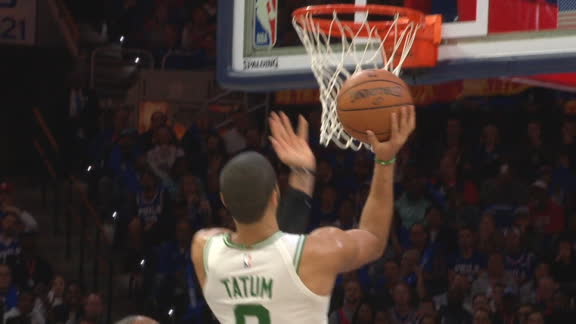 Tatum throws up unreal and-1
Jayson Tatum draws the foul and when the whistle blows, Tatum throws the ball and it miraculously goes in. 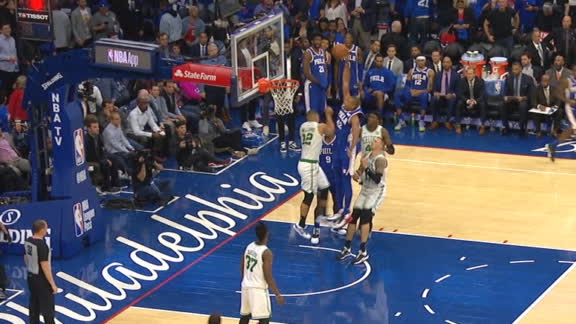