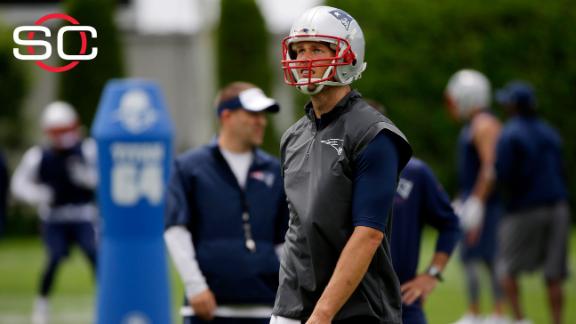 NFL commissioner Roger Goodell told CNBC on Thursday that a decision on New England Patriots quarterback Tom Brady's appeal of his four-game suspension "is coming soon," possibly as early as next week.

Patriots owner Robert Kraft also is attending the conference, and the two were spotted together Wednesday.

Brady appealed the decision to Goodell, who served as arbitrator, on June 23. Attorney Jeffrey Kessler, who has had success taking on the NFL in other high-profile cases, led Brady's defense and said, "I think we put in a very compelling case."

As part of the appeal, Kraft -- who was out of the country at the time -- sent a sworn affidavit backing Brady.

That Goodell served as arbitrator was a point of contention for Brady and the NFL Players Association, which had asked the commissioner to recuse himself because of its belief that he could not be impartial and might be called as a witness. But Goodell, citing the collective bargaining agreement, said it was his responsibility to oversee the hearing and protect the integrity of the league.

Attorney Ted Wells, whose report was used as the foundation for the NFL suspending Brady, fining the Patriots $1 million and stripping them of a 2016 first-round draft choice and a 2017 fourth-round pick, was present at the appeal hearing held at the league's New York City offices.

The penalties were announced after Wells found that it was "more probable than not" that the Patriots illegally underinflated footballs in the AFC Championship Game against the Indianapolis Colts on Jan. 18.

Wells' report was a central part of Brady's appeal, with his attorneys arguing that it didn't prove the quarterback violated rules. In an official letter from NFLPA general counsel Tom DePaso, it was stated that the report "grasps at dubious, contradictory and mischaracterized circumstantial evidence" and that it is a "legally inadequate basis upon which to impose unprecedented discipline."

Brady's side also argued that the penalties are "grossly inconsistent" with the NFL's past discipline of similar alleged conduct.

A source told ESPN's Adam Schefter that "Tom Brady's greatest ally was Tom Brady" in the appeal hearing. Sources also told Schefter that Brady came off as genuine, earnest and persuasive, with one calling it an "A-plus performance."