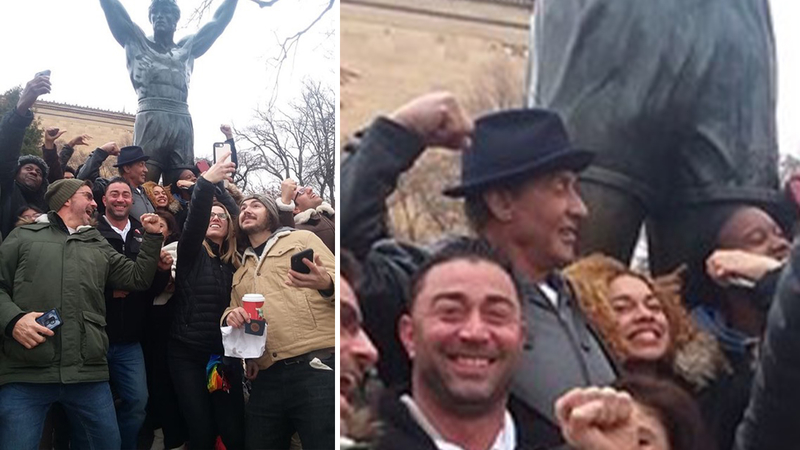 PHILADELPHIA -- A field trip turned into a brush with a Hollywood legend for a group of high school students from New Jersey.

Students from Eastside High School's Culinary Arts, Hospitality, and Tourism School in Paterson had just finished touring the Reading Terminal Market on Monday when they headed to the Philadelphia Museum of Art.

Tourists pose with the "Rocky" statue outside the museum every day and also run up its famed stairs, as the boxer did in the movie.

Sylvester Stallone, who played Rocky Balboa and also wrote the Oscar winning original and its five sequels, as well as co-starred in the "Creed" spin-offs, gave the students the surprise of a lifetime when he showed to greet them.

"When the students first arrived at the museum, they went to the statue and somebody said, 'Hey, you just missed Sylvester Stallone,'" principal Edgard Nieves said. "Nobody believed he was there, and then two black SUVs pulled up. A window rolled down, and it was Rocky asking the kids what school they all went to. When they said Eastside in Paterson, New Jersey, he got out and did a video and pictures with the students."

Stallone was in the area to film some promotional videos near the statue.

He posted video of the encounter on his Instagram page, which had more than 800,000 views on Wednesday.

"As Paterson Superintendent of Schools, I want to personally thank Mr. Stallone for taking a few moments to spend time with our students," she said. "His example reminds everyone that a gesture of kindness and caring can make a world of difference in how a person feels. And what he did this week in Philadelphia made all of us here in Paterson feel terrific. Mr. Stallone's' movie career began with his story that reminded everyone that there is a champion within each of us, and that is a message that resonates with the students and families of Paterson Public Schools. Mr. Stallone is welcome to come visit us here at Paterson Public Schools anytime."
Report a correction or typo
Related topics:
arts & entertainmentpennsylvaniaphiladelphiapatersonpassaic countyhigh schoolsylvester stallonerockysurprisestudents
Copyright © 2022 WPVI-TV. All Rights Reserved.
TOP STORIES
Man killed in apparent road rage shooting in Delco identified
Woman walking with baby stroller shot to death in Manhattan
Police searching for missing 1-year-old girl in Philadelphia
Man snaps pic of vintage Burger King walled-off inside Delaware mall
Jackson to be sworn in as 1st Black woman to sit on Supreme Court
Pack your patience: PHL expecting busy holiday weekend
AccuWeather: Hot today, sizzling tomorrow
Show More
Supreme Court to issue opinions on 2 major remaining cases Thursday
New retail report to show Center City business comeback
Man dies while cutting down tree in Berks County
Troubleshooters: PGW assessing Weather Normalization Adjustments
Bills limiting LGBTQ instruction, trans athletes pass Pa. Senate
More TOP STORIES News