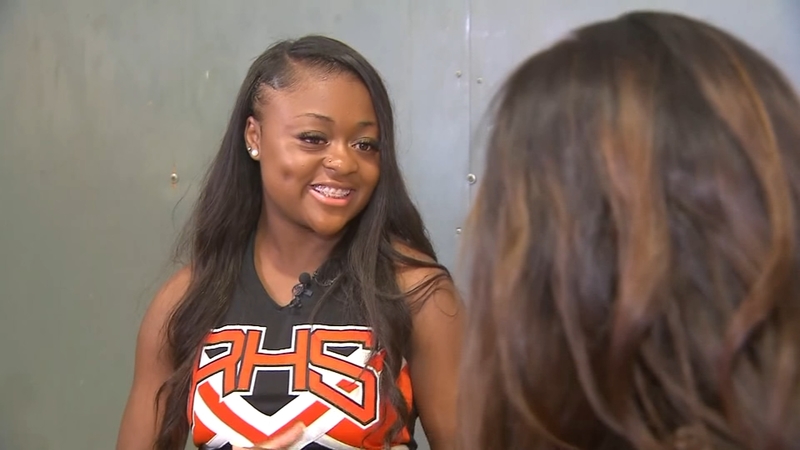 ROCKWALL, Texas (WPVI) -- A homecoming parade in Texas turned into a life-saving celebration for one mother. When her child began to choke, a quick-thinking cheerleader sprang into action and administered first aid.

On the cheer squad, senior Tyra Winters knows how to command a room. But during the Rockwall homecoming parade, it was Tyra who gave her full attention to a family in the crowd.

"I see the kid, I see a little bright red face, and his mom is holding him up begging for help, screaming asking 'someone help me, someone help me'," she told KTVT-TV.

From the parade float, Tyra zeroed in.

"My very, very first thought was like, 'Oh my God, I got to help this child,'" she recalled.

That child, 2-year-old Clarke, was choking on a piece of candy.

"I was sitting right next to him and I just happened to look over and there was no noise. There was no coughing, there was no breathing," said Clarke's mother, Nicole Hornback.

Hornback was trying desperately to help him.

"And at that moment, that's when I tried to give him the Heimlich and I've never taken a class. To feel so useless as a mother was the most terrifying thing in my life," she said.

But from atop the float, Tyra saw it all.

"Her kid is turning purple. So, I immediately jumped off the float, I ran down to the kiddo, and I was like 'I got it,' and I just grabbed him from the mom. I tilted him upside down, and I just hit a good three back thrusts," she said.

And just like that, little Clarke was breathing again.

"She saved my baby," said Hornback.

On Tuesday, the hero was reunited with Clarke and his mom.

Tyra learned the life-saving skills in 8th grade. Her mom is in the medical field.

"I commend her for being a teenager and being trained," said Hornback.

And this family is forever grateful that Tyra knew just what to do.

"You're amazing, you're going to do great things in life," Hornback told Tyra.