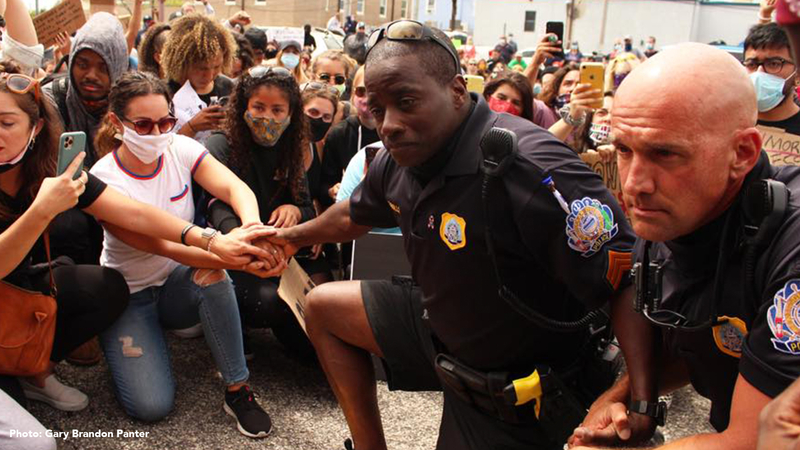 OCEAN CITY, N.J. -- It was a powerful message he had no plans on delivering.

Ocean City Police Sergeant Tyrone Rolls was patrolling a peaceful protest earlier this week when all eyes and ears turned his way. His impassioned speech reached hundreds in the crowd and thousands online.

"I get it out of uniform. I get it because I'm not recognized when I'm out of uniform," he said on Tuesday, June 2nd. "It's a lack of education. Our education system is failing us. We don't teach the real American history or where it comes from."

Born and raised in Ocean City, Rolls became a decorated man both in and out of uniform. He has received several community service awards from The Knights of Columbus, Macedonia United Methodist Church, and a recognition from NJ Congressman Jeff Van Drew. He holds 'the key to Ocean City,' thanks to an award presented by Mayor Jay Gillian during a celebration of Martin Luther King Jr.

He has spent 30 years mentoring youth in basketball, football, and track and field. And he always imparts wisdom and guidance for children to lead empowered lives.

The words he shared with hundreds of protesters earlier this week were a culmination of decades worth of wisdom.

Standing by his side was Lieutenant Pat Randles. A dynamic duo fit for a reality television show, their respect and love for one another set an example of what it means to be a "good cop."

Those citizens chanted "What do we want? Justice!" and "I can't breathe," while marching across the 9th Street bridge and laying on the street in front of the Ocean City Municipal Court building.

Deron Legette was one of these protesters. He recalls Sgt. Rolls being a part of his life as he grew up. It was young individuals like him who encouraged Rolls to step into the spotlight and say a few words for the crowd.

"The peaceful protest back then, the riots back then didn't work," Rolls would go on to say. "But this I love. We're all standing here together. No violence, no rioting. Everybody's getting their voice heard. But again, we have to learn a real history."

Legette shared his story while the crowd, including the two policemen, knelt in respect for George Floyd.

"It's not the time to be silent anymore. Black, white, it doesn't matter. Speak up," Legette tells us. "Let's continue to lead these protests with peace and unity across the entire United States and not destroy our communities."

Legette's high school friend, Magdalena Fisher, was also present at the protest. She wanted to make sure her community knew they had an ally. However, she was uncertain how the protests in her city would play out.

"I was nervous and I was prepared to stand there no matter what and protest peacefully," said Fisher, who noticed local businesses had boarded up their walls and windows in preparation for the worst.

However, the protest that ensued happened to be one of the best.

Also inspired by the words of Sgt. Tyrone Rolls was Carlos Bonilla from Ventnor, NJ.

"I could just hear the pain," he said.

His first time attending a protest, he did not know what to expect. However, he was certainly moved by the experience.

"What we need to do is just countlessly treat each other with respect and love." said Bonilla.

The Ocean City Police Department will continue being an advocate for all cultures who need a voice. Lt. Randles tells us, "It's important to maintain that diversity and think about the bigger picture outside of our small town."

Sgt. Rolls agreed. "Especially being the younger generation, that's what they need because they are our future."

"I'm putting a lock on the fence to symbolize that we can stand up to whatever we have to face in order to be successful." Community Journalist Matteo has more.