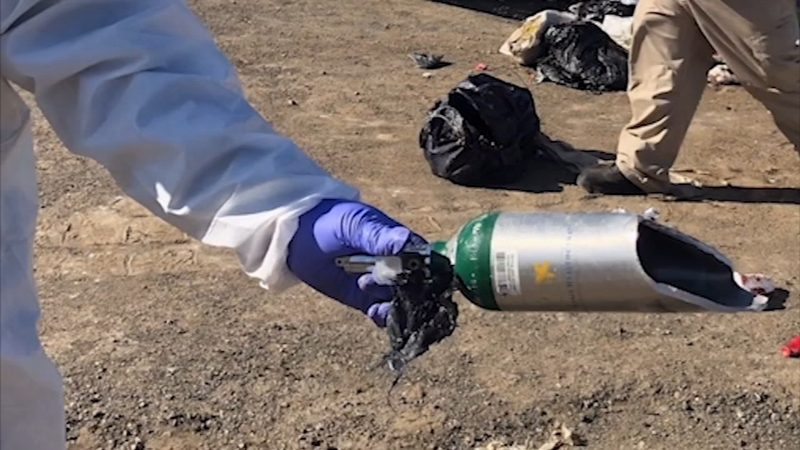 It happened shortly after 8 a.m. in the unit block of Vandever Avenue.

Police said the workers were loading refuse into their truck and began to compress the trash.

According to investigators, one of the workers noticed a pressurized tank was in the truck and as the compressor came down it caused the tank to explode, sending shrapnel flying into the air, hitting both men.

"It was just loud, a big bang," said the truck's driver. "I'm looking at my mirror and both of my men are lying on the ground. I was terrified."

Officials said a 40-year-old male worker sustained a chest wound and was transported by helicopter to Christiana Hospital.

The worker was conscious and alert on the scene and is listed in critical condition with non-life-threatening injuries, authorities said.

Action Cam on the scene where two sanitation workers were injured in a trash truck explosion, March 28, 2019

Officials said a second worker, a 42-year-old man, had trouble breathing following the incident. He was transported to Wilmington Hospital.

The following statement was released:

"We extend our best wishes for a speedy recovery to the injured employees and their families," said Mayor Purzycki. "Kelly, Mike and I also want to thank the less seriously injured worker, who provided immediate medical attention to his more seriously injured colleague as did the crew's driver. Both of them are to be commended for aiding their colleague in those critical moments until the Fire Department's emergency personnel arrived." The City's Human Resources Department will offer support services for employees who may have been affected by today's incident.