Trump and Kim in Singapore for historic US-North Korea summit 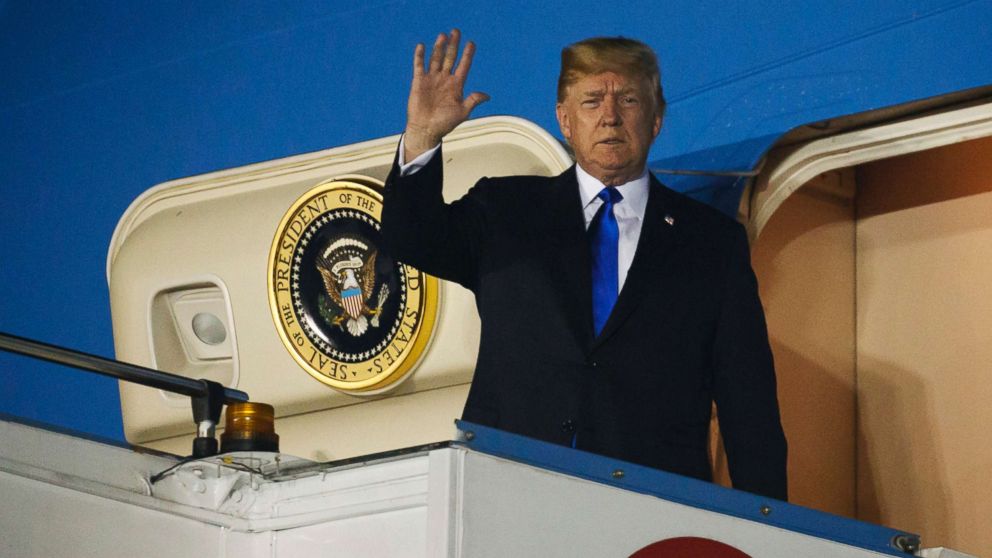 It will be the first time a sitting U.S. president has met face-to-face with a North Korean leader and the two men are expected to discuss North Korea's illicit nuclear weapons program, and a potential deal to denuclearize the communist country.

But the two leaders are famous for their improvisational styles, and it is unclear who will join them in the room for the first initial meeting beyond official translators.

The stakes are high for the first encounter between Trump and Kim, who have respectively called each other such belittling nicknames such as "dotard" and "Little Rocket Man."

Only two weeks ago, Trump canceled the meeting, citing "open hostility" from North Korea. But after some last minute diplomacy, the meeting was rescheduled for Tuesday at 9 a.m., Singapore time, at the exclusive Capella hotel on the secluded - and secure -- resort island of Sentosa where peacocks are known to roam the grounds.

Canadian Prime Minister Justin Trudeau blasted Trump's position on trade and said his country "will not be pushed around."

On his way to Singapore from the G-7 summit, Trump fired off a series of angry tweets from Air Force One attacking Candian Prime Minister Justin Trudeau who said Canada "will not be pushed around" by Trump's threats to raise tariffs.

But after discussing trade in Canada, the president shifted gears to focus on the summit. White House press secretary Sarah Sanders said the president spent his time "meeting with his staff, reading materials, and preparing for his meetings in Singapore."

Trump boasted he is "very well prepared" for the summit, but has tried to lower expectations heading into the meeting.

As he stepped off Air Force One in Singapore at night waving his hand and wearing a dark suit and blue tie, Trump said he felt "very good" when asked by reporters about the summit.

Singaporean Foreign Minister Vivian Balakrishnan greeted Trump before he got into his presidential limousine and departed the airport for the Shangri-La Hotel, where he and his entourage will stay.

Kim, meanwhile, arrived in Singapore a few hours earlier Sunday aboard an Air China plane and complimented his hosts for the accommodations during a meeting with Singapore Prime Minister Lee Hsien Loong at the Istana Palace, the official residence of the prime minister.

"It's a historic summit and you provided terrific conditions and provided convenience so that our people could come here with no discomfort," Kim, speaking through an interpreter, told Lee. "Singapore government promoted convenience with much effort as if it were their household affair."

He said that if the "summit works out with good outcome [the] Singaporean government's efforts will go down in history forever."

"I have the expectation that this [summit] will be very successful," Kim, speaking through an interpreter, told the prime minister.

Trump is scheduled to meet Prime Minister Lee for lunch on Monday at the Istana Palace. Later Monday, the president will meet with the U.S. Embassy staff in Singapore.

The United States has imposed various economic sanctions against North Korea over its weapons program in recent years. Since taking office last year, Trump has been hoping to secure a deal with North Korea in which Kim would relinquish his nuclear weapons.

The White House announced the upcoming nuclear summit last month, but diplomatic peace didn't last long. Kim threatened to pull back from the meeting and criticized the United States with typical, fiery rhetoric. In response, Trump called off the planned summit in an official signed letter.

A week later, Trump announced that the summit was back on after a North Korean envoy hand-delivered him a letter from Kim.

Trump departed the G-7 summit in Quebec having angered some American allies over his administration's move to impose steep tariffs on aluminum and steel imports from the European Union, Mexico and Canada.

He also left some G-7 leaders baffled by his proposal to allow Russia back into the group.

Trump backed out of a joint communique with the other G-7 countries that acknowledged that "free, fair, and mutually beneficial trade is a key engine for growth and jobs."

Trump rescinded his endorsement after Trudeau held a news conference saying all seven countries had signed the communique despite "some strong, firm conversations on trade, and specifically American tariffs."

Trudeau said he informed Trump that Canadians "who stood shoulder to shoulder with American soldiers in far-off lands" do not take lightly the idea that the tariffs are for national security reasons.

On Twitter, Trump said Trudeau was "meek and mild" at the G-7 summit, but was "very dishonest and weak" during his post-summit news conference.

"Based on Justin's false statements at his news conference, and the fact that Canada is charging massive Tariffs to our U.S. farmers, workers and companies, I have instructed our U.S. Reps not to endorse the Communique as we look at Tariffs on automobiles flooding the U.S. Market!" Trump said in a tweet.

"Let's be serious and worthy of our people. We make commitments and keep to them," Macron said. "International co-operation cannot be dictated by fits of anger and throwaway remarks."

Trump seemed more upbeat about his upcoming meeting with Jong Un, a ruthless dictator he has previously called "short and fat" and a "tyrant."

"I am on my way to Singapore where we have a chance to achieve a truly wonderful result for North Korea and the World. It will certainly be an exciting day and I know that Kim Jong-un will work very hard to do something that has rarely been done before..." Trump said in a tweet. "...Create peace and great prosperity for his land. I look forward to meeting him and have a feeling that this one-time opportunity will not be wasted!"

Earlier, Trump told reporters he will be undertaking a "mission of peace" as he heads into "unknown territory in the truest sense."

He described the highly-anticipated meeting as a "one-time shot" for Kim, but told reporters he thinks "it's going to work out very well."

"I think I'll know pretty quickly whether or not, in my opinion, something positive will happen," Trump said. "And if I think it won't happen, I'm not going to waste my time. I don't want to waste his time."

North Korea evolved into the nuclear-armed enigma it is today long before Trump took the White House. In fact, North Korea's nuclear weapons program and its development of long-range rocket systems have been three generations in the making. And the country's standing as a nuclear-weapon-possessing state has even been etched into its constitution.

Kim Il Sung, the country's founder, who ruled from its establishment in 1948 until his death in 1994, dreamed of an intercontinental ballistic missile as the United States threatened to use nuclear weapons against the North during the Korean War.

The Soviet Union, Pyongyang's ally and sponsor, began training North Korean scientists and engineers in the 1950s, giving them the "basic knowledge" to initiate a nuclear program, according to the American Security Project, a nonprofit nonpartisan public policy and research organization based in Washington, D.C.

After the collapse of the Soviet Union and the death of Kim Il Sung, Kim Jong Il succeeded his father amid a dire famine that killed up to 2.5 million North Koreans. To protect the state, the new leader developed the songun, or military first, doctrine, under which the military's access to resources is prioritized.

"In this sense, the military is not just an institution designed to perform the function of defending the country from external hostility," South Korean scholar Han S. Park wrote in a 2007 paper. "Instead, it provides all of the other institutions of the government with legitimacy."

Kim Jong Il died at the end of 2011 and his second son, Kim Jong Un, took power of the reclusive state.

In April 2013, Kim announced a policy of co-developing North Korea's economy and nuclear weapons program to reinforce his regime's domestic, diplomatic, economic and security interests, according to a 2015 report by the U.S. Department of Defense.

Since then, his regime has continued to develop intermediate and long-range ballistic missiles, while staging a series of nuclear tests. Kim is believed to have defied international rules six times to test nuclear weapons, most recently in September 2017.
Report a correction or typo
Related topics:
abc newsnational
Copyright © 2021 ABC News Internet Ventures.
More Videos
From CNN Newsource affiliates
TOP STORIES