Congressman Boyle is currently leading a delegation for an emergency meeting of the NATO Parliamentary Assembly in Brussels.
WPVI
By George Solis and Bob Brooks 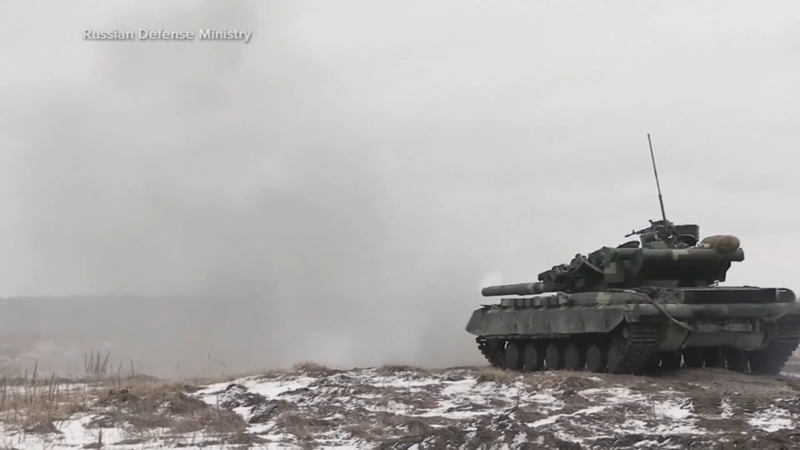 PHILADELPHIA (WPVI) -- Tensions between Russia and Ukraine are reaching a boiling point.

Both lawmakers and church leaders in the Delaware Valley, who are currently overseas monitoring escalating tensions, spoke with Action News on Monday.

Congressman Brendan Boyle is leading a delegation for an emergency meeting of the NATO Parliamentary Assembly in Brussels.

Boyle's congressional district also covers one of the largest Ukrainian American populations in the country.

Since late January, Borys Gudziak, the Metropolitan Archbishop of Philadelphia for Ukrainian Catholics in the U.S., has been overseas watching a bad situation grow worse.

"I believe that diplomacy can still prevail. I think that is still the prevailing view. At the same time, I'm realistic and so are my colleagues," said Boyle.

With an estimated tens of thousands of Russian soldiers along Ukraine's borders, Boyle said NATO's ability to aid allied countries bordering Ukraine is paramount as the threat of war looms.

"It was founded literally to resist then Soviet, now Russian aggression," Boyle added.

Since late January, Borys Gudziak, the Metropolitan Archbishop of Philadelphia for Ukrainian Catholics in the U.S., has also been overseas watching a bad situation grow worse.

"In Washington D.C., if there's an inch of snow, there's a run on toilet paper, people panic and buy up all the cereal. Well, people aren't panicking in that sense, but people have packed up refugee suitcases, women are going to crash courses in first aid training," Gudziak said.

Russian President Vladimir Putin Putin will recognize the independence of separatist regions in eastern Ukraine, raising tensions with the West.

The Archbishop is aware an invasion could mean the persecution of many, including religious leaders.

"I'm willing to give my life for my brothers and sisters," he said.

Russian President Vladimir Putin ordered forces Monday to "maintain peace" in separatist regions of eastern Ukraine, hours after the Kremlin recognized the area's independence. The announcement raised fears that an invasion was imminent, if not already underway.

The Kremlin decree, spelled out in an order signed by Putin, left unclear when, or even whether, troops would enter Ukraine. But it brought swift promises of new sanctions from the U.S. and other Western nations and underscored the steep challenges they face in staving off a military conflict they have portrayed as near-inevitable.

"What Putin wants is a guarantee from Ukraine that they're not going to join NATO," said Wolfe.

The reason why Putin doesn't want them to join NATO is the separation from the west.

"He wants to have the buffer zone against the west," said Wolfe.

But Wolfe also believes this conflict could be short-lived for multiple reasons. The main one being financial. Wolfe says sanctions have hurt Putin badly in the past.

However, he says the Russian leader does have some short-term advantages. Russia supplies much of Western Europe with natural gas that could be disrupted.

"Europe is heavily natural gas-dependent and the primary producer of that is Ukraine and Russia. He has that in the short term. But in the long term, he's hurting his own profits. So, he doesn't want an extended war," said Wolfe.

As far as affecting things here at home, Wolfe says if Putin invades, oil prices will no doubt climb and so will our gas prices.

Wall Street will likely take a hit, too.

"You have had 20 years of free money, low-interest money that's been feeding into the market. Then throw in Russia which is going to have some market effects," said Wolfe.