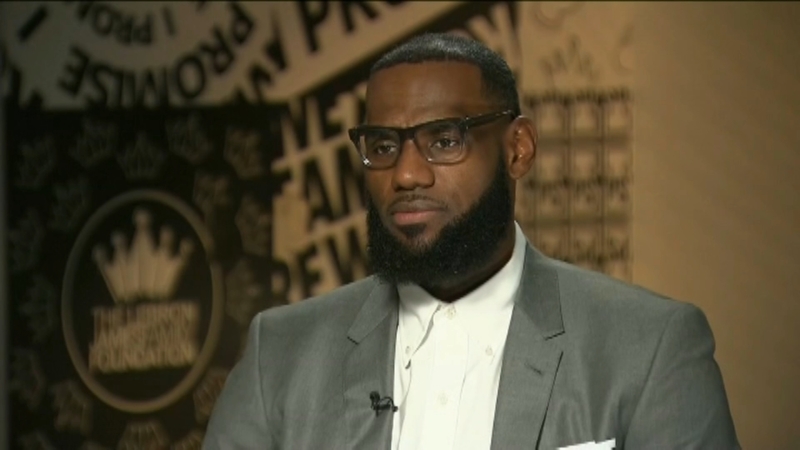 BRIDGEWATER, N.J. -- Ahead of campaigning in Ohio on Saturday, President Donald Trump unleashed a withering attack on the state's favorite son, savaging LeBron James in a late-night tweet that derided the intelligence of one of the nation's most prominent African-American men.

Melania Trump's spokeswoman quickly distanced the first lady from the criticism of James, saying in a statement Saturday afternoon that it appears James is "working to do good things on behalf of our next generation" and that the first lady would be open to visiting his new school. The statement doesn't criticize the president.

Trump blasted James after seemingly watching an interview the former Cleveland Cavaliers star did earlier in the week with CNN anchor Don Lemon in which he deemed Trump divisive. Although James has long been a Trump critic, calling the president "U bum" in a 2017 tweet, the Friday night tweet was Trump's first attack on the player, who just opened up a school for underprivileged children in his hometown of Akron.

"Lebron James was just interviewed by the dumbest man on television, Don Lemon," Trump posted. "He made Lebron look smart, which isn't easy to do."

Trump then, unexpectedly, appeared to weigh in on the growing debate over who is the greatest NBA player of all time, James or Michael Jordan, by writing "I like Mike!"

Many former and current professional athletes, including Jordan, jumped to James' defense.

"I support LeBron James. He's doing an amazing job for his community," Jordan said in a statement to The Associated Press through his representative via text Saturday.

Trump, who was features at a Saturday evening rally for a fellow Republican outside Columbus, has long denounced the media - CNN in particular - and rarely lets a slight go unnoticed.

But the attack on James, who was being interviewed by another black man, to some resembled a racial dog whistle and came just days after Trump deemed Democratic Rep. Maxine Waters of California, who is also black, as "low IQ" during a screed at a rally in Pennsylvania.

Ohio Gov. Josh Kasich, a Republican who at times criticizes Trump, tweeted: "Rather than criticizing @KingJames, we should be celebrating him for his charity work and efforts to help kids."

Trump has repeatedly been questioned about his views on race, from deeming many Mexican immigrants "rapists" during his campaign kickoff speech for the Republican presidential nomination to placing blame on "both sides" for the violent clash between white supremacists and counterprotesters in Charlottesville, Virginia, a year ago.

James, who campaigned for Trump's opponent, Democrat Hillary Clinton, and has not been shy about using his celebrity for social causes, did the interview from the public school he opened for at-risk kids in Akron, called the "I Promise" school. Every student receives free tuition, as well as free food, a uniform and even a free bike.

In the interview, James said he "would never sit across" from Trump, though he would talk to former President Barack Obama. James' publicist declined to respond to Trump's tweet, but early Saturday afternoon, James retweeted a post from the "I Promise" school and said, "Let's get it kids!! Love you guys."

The White House did not immediately respond to a request to clarify Trump's remarks. But even some Trump allies chided the remark.

Geraldo Rivera, the journalist, and Trump confidant broke with the president to say he wished Trump "turned other cheek re @KingJames & @donlemon While I disagree with their conclusion that @POTUS is using sports to divide America along racial lines, they're both sincere & intelligent men. LeBron just pledged millions for a school for underprivileged kids."

Along with Jordan, a number of other athletes spoke out in support of James.

Pro Football Hall of Famer Shannon Sharpe tweeted: "It should be beneath the dignity of a sitting POTUS to take racist shots at D. Lemon and Lebron James." NBA player Karl-Anthony Towns wrote: "So let me get this straight: Flint, MI has dirty water still, but you worried about an interview about a man doing good for education and generations of kids in his hometown?"

Before entering politics, Trump frequently praised James and his own family tried to recruit him to the New York Knicks in 2010. But commenting on someone's intelligence, including his own, has long been a Trump trope. He has been criticized for complimenting North Korean leader Kim Jong Un ("smart cookie") and Russian President Vladimir Putin ("very smart") and has been known to praise himself as "a very stable genius."

But he also uses "stupid" - or variations thereof - as a favored insult. He has used it to describe the FBI, the NFL, Democrats, the filibuster, the nation's immigration laws, journalists, trade policies and how the nation's leaders have dealt with topics like Iraq, Muslims, Canada and China.

He also, after former Secretary of State Rex Tillerson reportedly called him a "moron," challenged his own Cabinet member to an IQ test.

James played for over a decade - and in two stints - with the Cavaliers and delivered a title to the championship-starved region in 2016. Although he departed for the Los Angeles Lakers earlier this summer, the superstar remains very popular in the Buckeye State, and Trump's attack could be a gift for the Democrat in the congressional race that Trump is weighing in on Saturday in Ohio.

"I don't have to tell (asterisk)anyone(asterisk) what LeBron James means to Ohio," Democrat Danny O'Connor tweeted.