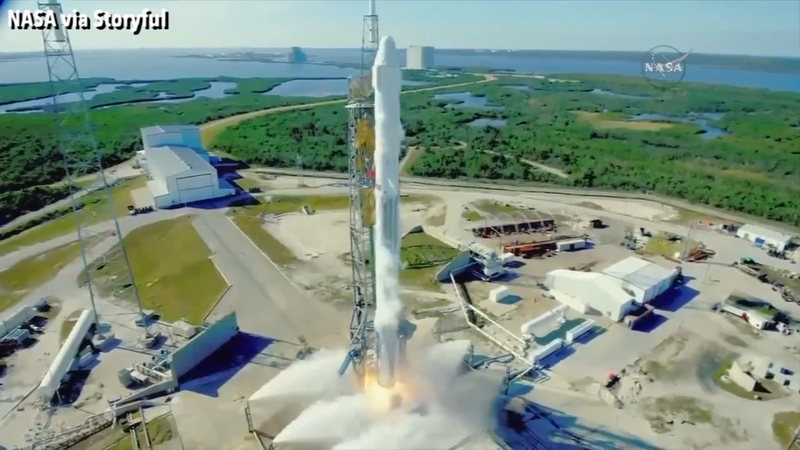 CAPE CANAVERAL, Fla. (WPVI) -- SpaceX racked up another first on Friday, launching a recycled rocket with a recycled capsule on a grocery run for NASA.

The unmanned Falcon rocket blasted off with a just-in-time-for-Christmas delivery for the International Space Station, taking flight again after a six-month turnaround. On board was a Dragon supply ship, also a second-time flier.

It was NASA's first use of a reused Falcon rocket and only the second of a previously flown Dragon.

Within 10 minutes of liftoff, the first-stage booster was back at Cape Canaveral Air Force Station, standing upright on the giant X at SpaceX's landing zone. That's where it landed back in June following its first launch. Double sonic booms thundered across the area. At SpaceX headquarters in Hawthorne, California, cheers erupted outside the company's glassed-in Mission Control, where chief executive Elon Musk joined his employees.

The Dragon reaches the space station Sunday. The capsule last visited the 250-mile-high outpost in 2015.

This time, the capsule is hauling nearly 5,000 pounds of goods, including 40 mice for a muscle-wasting study, a first-of-its-kind impact sensor for measuring space debris as minuscule as a grain of sand and barley seeds for a germination experiment by Budweiser, already angling to serve the first beer on Mars.

Ven Feng, a NASA manager, said he had "a little sense of deja vu" watching Friday's launch and landing of the same rocket he saw take off and return in June.

"Quite an achievement," he said.

For the past two years, the private SpaceX has been salvaging as much as possible from rockets following liftoff. Rather than letting first-stage boosters sink in the Atlantic, as other orbital rocket makers do, SpaceX flies them back to Cape Canaveral for vertical touchdowns or, when extra rocket power is needed to propel a satellite extra high, to a floating ocean platform.

Reusability is the future for spaceflight, according to NASA's station program manager Kirk Shireman.

"The reality is, the business of space is dominated by launch costs ... so getting the costs down is important for everyone," Shireman said.

NASA flew its first reused capsule back in June. But managers waited until SpaceX had three rocket reflights under its belt, before putting NASA's station equipment and experiments on a secondhand Falcon. After extensive reviews, the risk of flying a reused rocket, versus a brand new one, was judged to be pretty much equal, he said.

Friday's booster recovery was the 20th for the company.

Jessica Jensen, a SpaceX manager, said the company aims to reuse rockets - and capsules - far more than twice. The only way to get thousands of people into space - the ultimate goal of Musk - is by drastically cutting launch costs, she said.

This was the first launch from the SpaceX-rented Complex 40 in more than a year. The last time a Falcon rocket stood at the pad ready to fly, in September 2016, it blew up during a fueling drill. SpaceX spent $50 million rebuilding the pad.

Friday's successful liftoff means SpaceX has now launched from all three of its pads - two in Florida and one in California - in the same year.

"This was a fantastic way to end the year for SpaceX East Coast launches," Jensen told reporters.

The space station is down to three astronauts until Sunday's launch of three more. The Dragon should arrive at the orbiting outpost a few hours after the fresh crew launches from Kazakhstan. Once back up to full capacity, the station will be home to three Americans, two Russians and one Japanese.

SpaceX - one of two private shippers contracted by NASA - has been making station supply runs since 2012.