The office of the Honorary Consulate of Ukraine will hold a rally Sunday at 2 p.m.
WPVI
By TaRhonda Thomas and 6abc Digital Staff 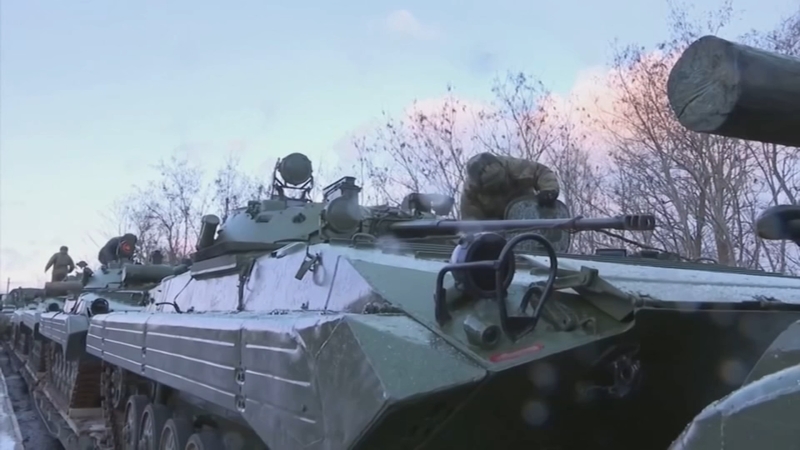 PHILADELPHIA (WPVI) -- As Eugene Luciw sits in his office in Philadelphia's Northern Liberties neighborhood, he can't help but think about the rich history of the area for people who share his Ukrainian heritage.

"My parents came from Ukraine. As a matter of fact, they were refugees from World War II," he said.

That type of situation is what Luciw fears the world could experience again if Russia invades Ukraine," said Luciw, who serves as president of the Philadelphia Branch of the Ukrainian Congress Committee of America. "I don't think we've seen a war like this in the west since World War II. If (Vladimir) Putin crosses the border, you're talking about a massive humanitarian disaster."

Since Russian troops began positioning themselves along the Ukraine border, Luciw's days have been filled by sharing information with people seeking to know the current situation in Ukraine.

Luciw says this ramp-up of troops is different from what the Ukrainian people have experienced since the Ukrainian revolution in 2014.

"For eight years, they've been laboring under this constant worry of what's going to happen to them next because they know they're a target for Vladimir Putin," he said. "There's no question he wants to restore the Soviet Union. He wants an empire."

RELATED: Ukrainian community in Philadelphia reacts to threat of war in country

Luciw says Ukraine is key because of its positioning in Eastern Europe. In the shape that frames up Ukraine, Russian troops are now positioned at three-quarters of those sides.

"They are positioned across almost all of the border except at the border with Poland," said Iryna Mazur, honorary consulate of Ukraine in Pennsylvania.

Her family lives on the side of Ukraine that is closest to Poland, the only side on which Russian troops have not positioned themselves.

"My parents are relatively safe, but they are scared," she said.

She's been fielding concerned calls from people who have relatives in Ukraine.

Ukrainian-Americans have a long history in Philadelphia, with an estimated current population of 10,000 in the city and more than 60,000 across the Delaware Valley.

As President Biden put 8,500 U.S. troops on heightened alert for deployment this week, Ukrainian Americans in the Philadelphia area are counting on the U.S. for military and moral support.

"We all pray for peace," said Mazur.

The office of the Honorary Consulate of Ukraine will be part of a show of solidarity with Ukraine. They will hold a rally on Sunday at 2 p.m.

It will begin on the steps of the Philadelphia Museum of Art and include a march to Love Park. The public is invited to attend.