Villanova hits the road to the Final Four 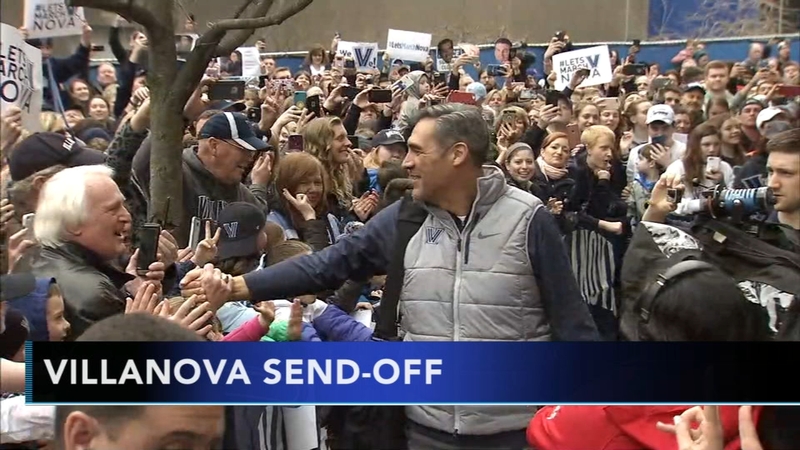 VILLANOVA, Pa. (WPVI) -- An enthusiastic send-off, with a pep band and several hundred of the Nova Nation wishing good luck to the Final 4 bound Villanova Wildcats squad as it departed campus Wednesday.

"This never gets old," said Coach Jay Wright. "Bigger and better every year.

Amazing sendoff for @NovaMBB as they head to San Antonio for the #FinalFour. @VUCoachJWright says “Wow, this never gets old”. pic.twitter.com/OYWtAktZVX

Not far away at the campus bookstore, the hot items were not the textbooks.

"The Biggest Sellers are the Final Four t-shirts the team wore after they won the other night, and then any other merchandise that references the Final Four," said Rachel Maciag, manager.

When asked for a prediction about the Kansas game, Kristin Post said she doesn't want to jinx anything.

"I am hoping for the best," said Post. "I am knocking on wood everywhere I go and saying my prayers."

Post and some others at the rally are getting ready to head to the game.

Snagging a 40 dollar student ticket no easy feat we're told. There was a web link, but you needed faith and tenacity.

"It says no tickets available, said Shreya Chary, who is heading to the game. "But if you keep refreshing it there is a chance you will get one. Something might come up."

Jillian Ruffini is going, but with a 400 dollars ticket from StubHub.

"It's hard to talk about it," said Ruffini. "I didn't get one. I was heartbroken."

Once in San Antonio, the plan for many is a single hotel room and some close quarters.

Like friends Kriya Amin and Caitlyn Duzy who said they will be with six friends, bunking in one room.

Across campus, Villanova's president mused about how capricious March Madness can be.

"You could be that number one seed that goes out. You know, we did it last year, the first weekend we were gone," said Villanova University President Father Peter Donahue. "So you never know. You just never know."