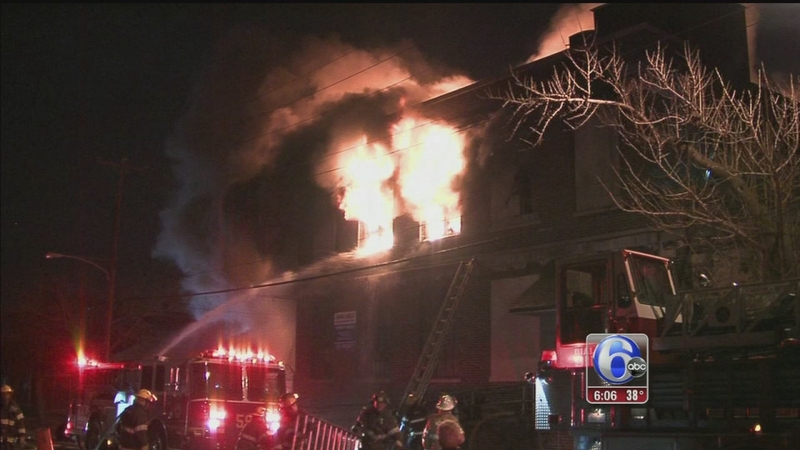 NORTH PHILADELPHIA (WPVI) -- A 4-alarm fire destroyed a 65,000 square foot warehouse that was for sale in North Philadelphia.

It was around 2:30 a.m. when crews were called out to the 2400 block of West Westmoreland Street.

The building, which was vacant, was the site of an old manufacturing company.

Officials say 120 firefighters responded and 33 pieces of equipment was used to fight the flames.

As firefighters began laying hoses and setting up ladders the smoke quickly thickened and began pouring out of windows on both the first and second floor.

Within minutes of arriving, flames burst through the roof of the second floor, forcing firefighters out of the building and fighting the fire from the street.

Part of the roof and interior walls collapsed but fortunately no one was inside.

The block-long vacant warehouse burned for several hours before it was contained just after 6:00 a.m.

The fire's proximity to railroad tracks made fighting the blaze tough.

Fire Commissioner Derrick Sawyer explains, "We didn't have access because of the railroad, that's one section of the building we couldn't have access to. So we had to change our strategy just a little bit, but we were still able to get water on it."

A cause has not yet been determined but investigators believe leftover furniture and equipment may have contributed to the fire.

The fire has left an impact EPTA's service.

SEPTA says service on its Manayunk/Norristown Regional Rail Line will remain suspended throughout the weekend.

A wall of the warehouse, located adjacent to SEPTA's train tracks, has been deemed unsafe. SEPTA says that wall must be demolished before train service can resume.

Commuters should go to septa.org for alternatives.