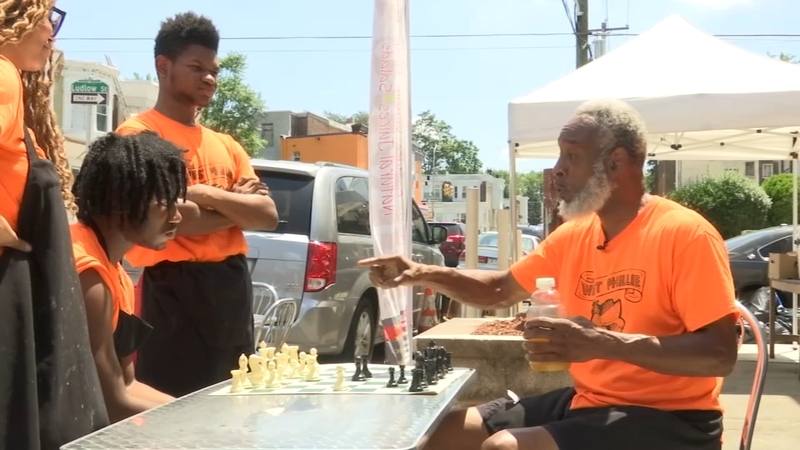 PHILADELPHIA (WPVI) -- If you ask Arnett Woodall, chess is a lot like life.

"You're always thinking your next three moves in life," he explained to his opponents -- three teens he employees at his food stand, West Phillie Produce.

Woodall believes the break in the day to play is just as valuable as what they learn in the kitchen.

"When we start fighting against poverty and crime in the city of Philadelphia, they need to see a good example of someone that will get up every day, open up a business and be there for him every day," said Woodall, who's the CEO and president of the produce stand and its connecting businesses.

Woodall's work with city youth began inside juvenile prison where he spent 16 years as a teacher's aide. He says during that time, he realized kids in the community need the same kind of education, so he opened A&W community solutions.

"We based ourselves in the community right at ground zero where you need the help and the support," he said.

The store's location, a block off of Market on 62nd Street, is no accident. Twenty years ago, it was a drug-infested lot. Woodall helped transform it with the help of the West Philadelphia kids he was mentoring.

The store has developed into a place where Woodall donates food to the community, teaches trades like cooking and painting, and most importantly to him, gives the kids structure.

"Learning more of what I want to do in life and what to achieve through food," said Danielle Hodges, a 15-year-old employee.

"It helps you more, keeps you out of trouble," said 18-year-old employee Asur Scott Thomas.

He's teaching about planning and patience on the chessboard and in life.

"After you make a move, ok what's my next three moves," he told the kids again.