Matthew Kennedy says if he was sitting up, he may not have lived to tell the story.
WPVI
By Katie Katro and 6abc Digital Staff 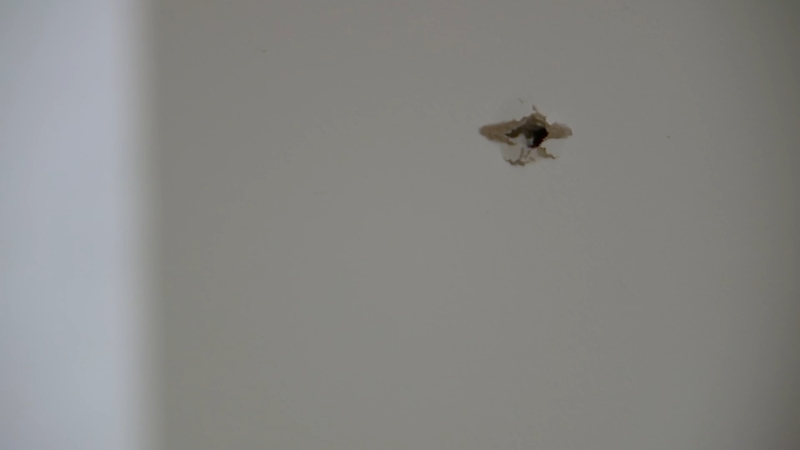 CHESTER, Pennsylvania (WPVI) -- A Widener University student is thankful he's alive after a bullet pierced through his off-campus home window on the second story.

Matthew Kennedy says he was hunched over homework in his room Thursday around 8:30 p.m. when out of nowhere, a bullet came flying through this window on the 900 block of East 14th Street.

"It sounded like a firecracker went off right here," said Kennedy. "I just threw myself down because I didn't even know what it was at first. Something just came through my window."

Kennedy says if he was sitting up, he may not have lived to tell the story.

"I'm looking at the bullet hole right now as we talk me sitting straight up," said Kennedy. "Inches from death."

Instead, he said the bullet missed him but pierced through his window, flew through his wall, and into his roommate's bedroom.

Luckily his roommate wasn't home. And while Kennedy felt pretty lucky he wasn't hit-- he says he's doing his homework in the living from now on.

"One in a million I feel like it's still terrifying to have, but yeah, it's unnerving," said Kennedy.

The house is about a block from campus. Kennedy's bedroom window faces I-95. Chester police are looking at the direction of the bullet to see if it came from the highway.

Police do not believe Kennedy was targeted.

Police are canvassing the area for surveillance but say they need the public's help on this one.

If you have any information, Chester police want to hear from you.

"The incident that took place on February 3 happened at a private residence in Chester, located outside the Widener University campus.

The university learned of the incident last night and received the police report identifying the student this afternoon. After learning the student's identity, we reached out to them to offer support, including the support of university counseling services.

The university has also offered on-campus accommodations to the student, should they find that more comfortable. Widener's Campus Safety Department continues to be in contact with the Chester Police Department, which is investigating the incident."