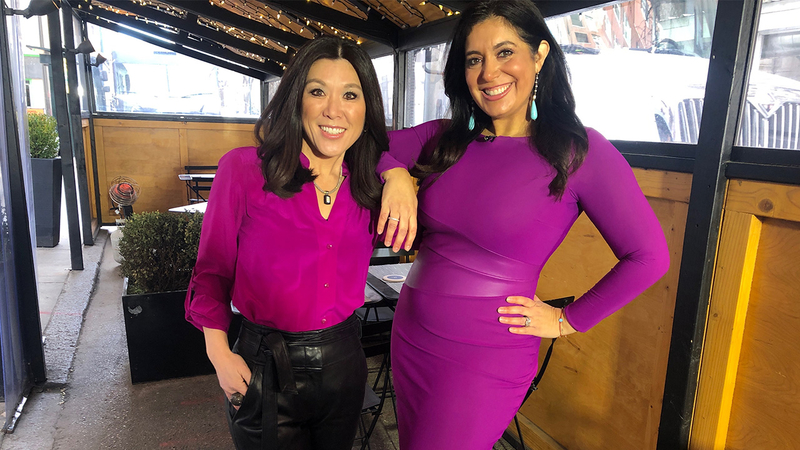 PHILADELPHIA (WPVI) -- We're celebrating Philly's ladies for Women's History Month. From James Beard recognized chefs to women building empires. Plus, a maker who will help you find your joy.

Philadelphia has 17 semi-finalists for the prestigious James Beard Award.

And because we're celebrating women's history month, we're giving a shoutout to all the ladies on the list.
Outstanding Baker: Mercedes Brooks and Rhonda Saltzman, Second Daughter Baking Co.

Second Daughter Baking Company is actually run by two sisters, Mercedes Brooks and Rhonda Saltzman. They started their business during the pandemic after both had lost their jobs.

With a shop inside South Philadelphia's Bok Building, they quickly became known for their towering cakes, usually six layers high.

Angela Cicala , of Cicala at the Divine Lorraine is up for outstanding pastry chef.

Her husband, Joe Cicala, has been nominated several times for his rustic Italian fare but this is a first for Angela. She is one of only 20 pastry chefs nationwide up for the award.

Her family is from the Abruzzo region of Italy and she says her recipes are from her family and small villages in Italy.

That means the menu is set and everyone gets served at the same time.

Shulman introduced the communal dining experience during the darkest days of the pandemic, and now the Vetri alum is up for best emerging chef.

In 1997, Ellen Yin left her job as a management consultant in health care to open Fork in Old City

When the pandemic hit, she partnered with other women restaurateurs to start the Sisterly Love Food Fair, so the ladies could help boost each other's businesses.

Corinne's Place has served soul food with a heart of gold for three decades.

Corinne's Place puts Camden in James Beard Awards spotlight
Corinne Bradley-Powers opened soul-food mainstay Corinne's Place in her hometown of Camden 30 years ago, and never looked back.
Now she has been awarded a coveted James Beard Foundation America "Classics Award", of which there have only been about 100 given in the entire country.

The award recognizes not just good food, but "food for good" - noting restaurants that are also pillars in the communities where they operate.

At her namesake Dim Sum House by Jane G's, Jane Guo is known for her authentic dishes from the Southeast region of China.

Dim Sum House serving authentic Chinese for 40+ years
At her namesake Dim Sum House by Jane G's, Jane Guo is known for her authentic dishes from the Southeast region of China, like crispy honey walnut shrimp, lobster noodles in a ginger and scallion sauce and beef chow fun.

But the most popular thing on the menu is the soup dumpling, part of the all day and night Cantonese and Shanghai dim sum menu.
Guo emigrated to the United States in the 1980s and opened her first restaurant in Pottstown.

And she says she faced doubters along the way, particularly her parents who were worried how she would juggle running two restaurants and raising three children after she and her husband divorced in 2004.

But she did it.

Now, after 32 years in the business, Guo's kids have grown up. Two of her sons have joined her in the restaurant, and she can take time off to spend with her 6-year-old granddaughter.

But don't let that talk of slowing down fool you. Jane says she plans to open a new spot very soon in Fishtown.

They're serving up traditional Italian favorites like pasta, seared swordfish and mom mom's meatballs, and, of course, there's pizza.
It's a thick crust pie, similar to a grandma pizza, Sicilian and Detroit but made with a high hydration, long fermentation dough so it's super light and crispy.

The ladies were also determined to develop a gluten-free crust that would actually taste good.

After many fails, they finally came up with what they say is a winning crust.

The square pies are traditional; the skinny ones gluten free and there are five flavors to choose from-from pepperoni or cheese supreme to the Spicy Nonna, topped with spicy soprassado and hot Calabrian honey.

There are also two white pies, a burrata with Brussel leaf and a potato with pistachio pesto and rosemary.
There's a full bar with cocktails celebrating Italian pop culture, like the sour godmother, Dr. Vinny boom botz, the big Ragu and The Situation,

Dope Botanicals made its Philly debut in January under the ownership of sisters Nakia and Taahira Stith.

Sisters collaborate to bring plant-based wellness to Rittenhouse
Dope Botanicals made its Philly debut in January.

Sisters Nakia and Taahira Stith opened the space after living the plant-based life "before it was a trend."
Both sisters, who grew up 13 years apart, credit their father for putting the family on a plant-based diet as they grew up.

Inside the Rittenhouse Square shop, you will find a wall of herbs for teas.

Each is sold by the ounce with custom blends available.

Every purchase also comes with instructions on how to properly prepare or use the products they sell.
Opposite the herb wall is a wall of products created in house with everything from liquid tinctures to powders for infusing your diet.
Behind the counter they are using fresh ingredients for smoothies and shakes and creating tonics like Cool Killa to help remedy a hangover or headache.

The shop is based around the healing power of herbs with claims to help sleep, mood and energy levels.

EMBED More News Videos
Get Glowing with Radiate Joy Skincare
Radiate Joy is a plant-based skincare made with Baobab oil.

Baobab oil is a superfood that comes from the African Savannah known as the "tree of life."

Founder Joy Genuardi Mears sources her ingredients from an indigenous community in Northern Ghana. The hydrating oil is rich in Vitamin C, A, F and antioxidants.

Mears says she transformed her life during the pandemic when she found the fountain of youth in the tree of life. Now she wants to help everyone find their joy.

You can find her products at boutiques in the city and suburbs, including Local PHL Market.

Mears also donates a portion of proceeds to organizations that help empower women and support their mental health.

Enjoy a special 50% off discount for your entire cart using the code "6ABC" at checkout (Offer good until March 19).

Two Philly entrepreneurs have opened shops near where they were raised.

Philly entrepreneurs return home to open Sam Shaw's Treatery, Yowie
Two women, both entrepreneurs born and raised in Philadelphia, have opened shops near where they were raised.

Sam Shaw's Treatery is a culinary and home goods shop that also bakes cookies fresh onsite daily.
Samantha Shaw is a Society Hill native and former tennis pro who recently turned in the racket for opening a space where she curates handmade goods and culinary delights she herself enjoys, including original-recipe Koffmeyer's Cookies.
Yowie is another shop nearby, specializing in design-forward art objects for the home and more.

Shannon Maldonado has been into fashion since she was a child growing up in South Philly, going to Fabric Row with her mother to buy materials to make clothing and costumes for years.

She turned her eye for design into a corporate career, and now curates a collection at her own shop.

Women in Motion showcases the works of more than 50 women artists, while Skin in the Game is the first retrospective of Joan Semmel's 60-year career.

PAFA celebrates women with 'Women in Motion', 'Joan Semmel' exhibits
Women in Motion showcases the works of more than 50 women artists, while Joan Semmel: Skin in the Game is the first retrospective of the artist's 60-year career.

Women in Motion, 150 years of Women's Artistic Networks at PAFA showcases the works of more than 50 women artists.

Filling more than half the galleries of PAFA's historic landmark building, it explores the role of women artists at PAFA from its 1805 founding to the end of World War II.

Across the plaza in PAFA's Hamilton Building, Joan Semmel: Skin in the Game is the first retrospective of Semmel's 60-year career.

At age 89, Semmel is still a practicing artist, and she was a pioneer in the feminist art movement.

SHOW EXTRAS
Good King Tavern in Bella Vista has been a neighborhood go-to for French comfort food since 2013. In 2019 owner Chloe Grigri transformed the 2nd floor into a wine bar called Le Caveau that she says feels like France.

The place earned a James Beard nomination for outstanding wine program in 2019.
It's a place where you can nerd out on varieties from around the world while enjoying snacks like a hotdog stuffed into a baguette that Chloe says is a common street food in France.

In celebration of Women's History Month, the ladies behind the Sisterly Love Food Fair are hosting a special event on Monday, March 28 at the Deacon.

It starts with a series of workshops for women interested in any kind of business, but particularly food businesses.

That will be followed by a cocktail reception and pop-up food fair at 6 pm, which is open to the public, and features more than a dozen award-winning female chefs + restaurateurs.
Sisterly Love Collective | Website| Facebook | Instagram | Tickets |

The Golden Girls are coming to Craft Hall in Fishtown in March, in the form of a murder-mystery dinner staged by the woman-owned theater company Without a Cue Productions.

Golden Girls Murder Mystery: The curse of Jessica Fletcher Is an immersive 90-minute show with a three-course dinner, cocktails, and solving "whodunnit" with a prize.

It also pays tribute to the original Golden Girl, the late Betty White who was a huge champion of animals rights and care. A portion of ticket sale will go to Philly PAWS.