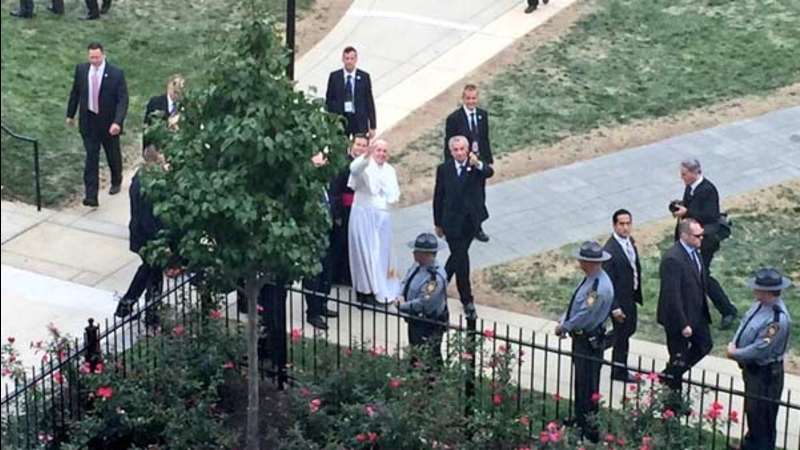 In front of the campus chapel, the pope said hello to students and university dignitaries and then blessed the "Synagoga and Ecclesia in Our Time" scultpure with holy water bringing more cheers from the crowd.

For the hundreds of students and alums, it was an emotional experience.

"We just want to say thank you to everyone and thank you to the pope for coming to St. Joe's! The hawk will never die," alumna Mary Kay Durkin said.

The bronze work by noted Philadelphia artist Joshua Koffman was installed Sept. 25 at the plaza in front of the Chapel of St. Joseph-Michael J. Smith, S.J., Memorial, commemorating the 50th anniversary of Nostra Aetate, the Vatican II document that transformed the relationship between the Catholic and Jewish faiths.

Called "Synagoga and Ecclesia in Our Time." It's an interfaith bronze statue celebrating the relationship between the Catholic and Jewish faiths.

Student Body Vice President Natalie Roche shook the pontiff's hand and received a gift, but perhaps the best gift of all were the words they exchanged.

"I said, 'Thank you for all of your love and happiness.' He said, 'I pray for you as you pray for me,'" Roche said.

Pope Francis is the first Jesuit pope, and with St. Joseph's being a Jesuit university, rumors were swirling for days that he might come to visit the campus. Students say they were thrilled when he actually did.

"To shake the hand of someone who's that holy, who really emits that much positive vibes, I don't know how else to put it, it's just phenomenal," Student Body President Nicholas Chingas said.

"Best moment of my college career so far and probably one of the best moments of my life," Bridget Durkin of Havertown, Pa. said.

As he walked away, the pontiff stopped to wave to students in the dorm windows and then, the crowds on City Avenue went wild once again as Pope Francis waved from his Fiat on his way to celebrate Mass on the Ben Franklin Parkway.