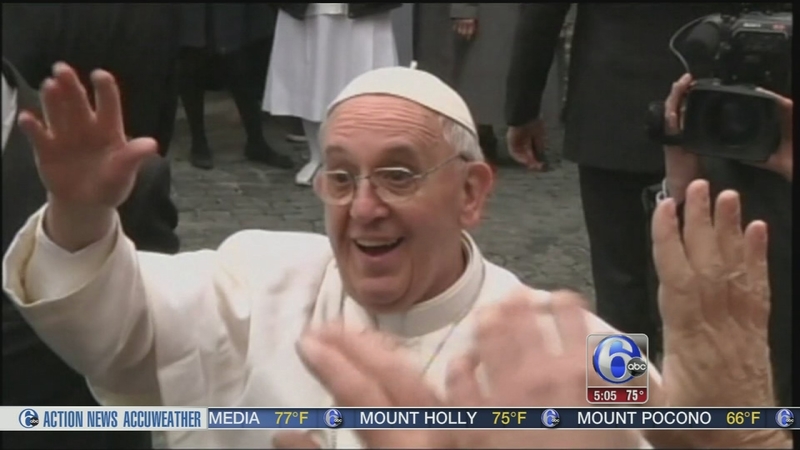 PHILADELPHIA (WPVI) -- There are new concerns about the security of Pope Francis when he comes to the United States.

Over the weekend the Chair of the House Homeland Security Committee revealed that officials have disrupted a plot, and given the way the pontiff likes to mingle with his followers, they say the risks are real.

Tuesday morning, a report by ABC News' Pierre Thomas revealed that the FBI quietly arrested a 15-year-old boy outside of Philadelphia for allegedly threatening to launch an ISIS-inspired assault on the pope during his visit to the U.S.

A security expert we talked with says he's not surprised to hear there's already been a threat.

Security analyst Jack Tomachio says, "It really doesn't surprise me. We see a lot of these incidents when we have a national security event."

Tomachio is a former high ranking official of the U.S. Department of Homeland Security. He says high profile events, like the pope's visit, tend to attract individuals who want to make a name for themselves, or are just intent on doing harm.

Sunday on ABC's "This Week" the head of the House Homeland Security Committee, Rep. Michael McCaul (R-TX), revealed the government has already headed off a threat against the pope.

McCaul said, "We have disrupted one particular case in particular. But as that date approaches I think we'll all be very vigilant to protect him as he comes into the United States."

Workers have been busy assembling the venue on the Parkway where the pope will join a Family Festival Saturday and celebrate Mass Sunday. Eakins Oval is now surrounded by a 6-foot high security fence, and multiple security cameras and communications links have been going up.

But the majority of the security work is going on behind the scenes as agents monitor the internet and social media for signs of a threat.

Sorting the real threats from idle chat isn't easy. Tomachio says, "You try to track them down and you kind of connect the dots and see if there's anything really there or if this is just white noise."

Philadelphia is a special challenge. It's the only venue where the pope will have outdoor events, three of them, attracting huge crowds.