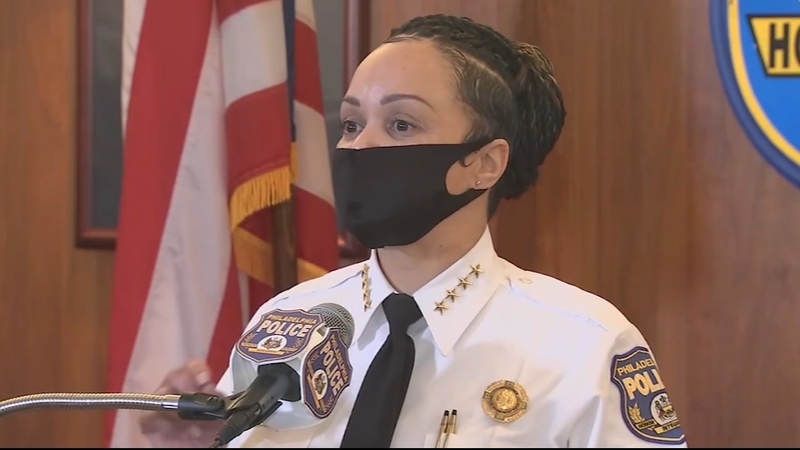 PHILADELPHIA (WPVI) -- It's been one year since Danielle Outlaw took over as Philadelphia's first Black, female police commissioner.

On Wednesday, community leaders gathered for a virtual event to express their support for Outlaw following a scathing report last month that was critical of her handling of summer protests.

"We want her to be successful in this city. So, we stand with her," said event organizer, Evelyn Sample-Oates. "We have a social media campaign hashtag we stand with Commissioner Outlaw. So we are not going away. We are going to make sure that she is successful."

Outlaw is the city's first African-American female police commissioner and those who attended the town hall stress it's a job that needs community support.

"Police Commissioner Danielle Outlaw cannot do this alone. We have to all work with her," said Rev. Lorina Marshall- Blake.

City residents admit taking over during a pandemic and dealing with raging gun violence is not an easy task.

"I think the commissioner is doing a good job. It is just a large uprising of crime and not one person can handle everything," said resident Howard Gilliam.

"Honestly, it is probably one of the toughest jobs in the city. The city obviously has a lot of problems. I think she has been handling it well," said Tobias Brown of Kensington.

But not everyone is singing the commissioner's praises. There have been calls for Outlaw and Mayor Jim Kenney to resign after the city controller's report claimed there was a lack of planning and preparedness during the violence on city streets in the wake of George Floyd's death.

The department has also been criticized for using tear gas on protestors along Interstate 676.

"I don't understand people who say we need to give her a chance to see how she is in this leadership role. We have seen her in leadership roles before in another city and she has made that same decision. So, we don't need to see anymore. We need to see her resign and we need to see Kenney resign as well," said organizer and writer, Abdul-Muhammad.

RELATED: Philadelphia controller finds failed planning, leadership in city's Floyd protest response
town
The commissioner has since apologized for the use of tear gas and in a recent press conference, said she is not stepping down.

"I have not been been asked to resign nor will I resign," said Outlaw.

Outlaw supporters say they are confident she will succeed and won't repeat past mistakes.

"She has absolutely said that it will not happen again. She is very clear on the use of force," said Andrea Curtis with the Urban League of Philadelphia.