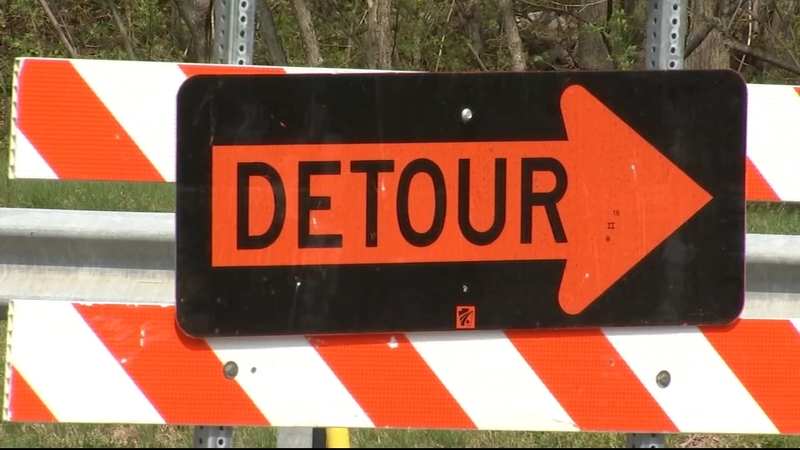 PLYMOUTH MEETING, Pennsylvania (WPVI) -- Lately, some drivers in Plymouth Township, Pennsylvania have had a sinking feeling while getting around town.

"It's a big pain and inconvenience," said resident Kim Carter.

That's partly because plans to use Chemical Road - from the Metroplex to about the Blue Route overpass - have fallen through because of a sizable sinkhole.

"It's a pain in the butt because now we have to go all the way down Ridge (Pike) ... instead of going down Germantown (Pike) and Chemical (Road)," Carter said.

The Pennsylvania Department of Transportation was made aware of the problem about two weeks ago. The decision to close the heavily commuted section of the roadway was made to protect drivers and businesses.

Officials noted a quick fix could just as easily lead to another closure.

"Of course, we weigh the impact that this traffic restriction is having to the community but we also have to weigh safety," said PennDOT Spokesperson Chelsea Lacey-Mabe.

There's also a lot of science at work as crews are not only trying to figure out why the sinkhole formed but how to best repair it so it doesn't happen again.

"We've been doing testing there and we actually have a meeting tomorrow to see if these repairs can be made in the interim or if we have to wait until they can be fully addressed under a design project," Lacey-Mabe said.

The potential wait is a less than pleasant reminder of a sinkhole at around Butler Pike. Repairs there took more than a year.

"It is difficult. They pop up from time to time and it's a big concern for our residents," said Township Public Works Director Christopher Loschiavo.

Loschiavo said the limestone that lurks beneath the region makes it prone to sinkholes.

"They're always quick to call and we're always out there to make sure it's nothing more than something," Loschiavo said.

PennDOT officials said they will meet Thursday to see if at least one lane can reopen whole repairs are made.
Report a correction or typo
Related topics:
trafficplymouth townshippennsylvania newssinkholetraveltraffic
Copyright © 2021 WPVI-TV. All Rights Reserved.
More Videos
From CNN Newsource affiliates
TOP STORIES