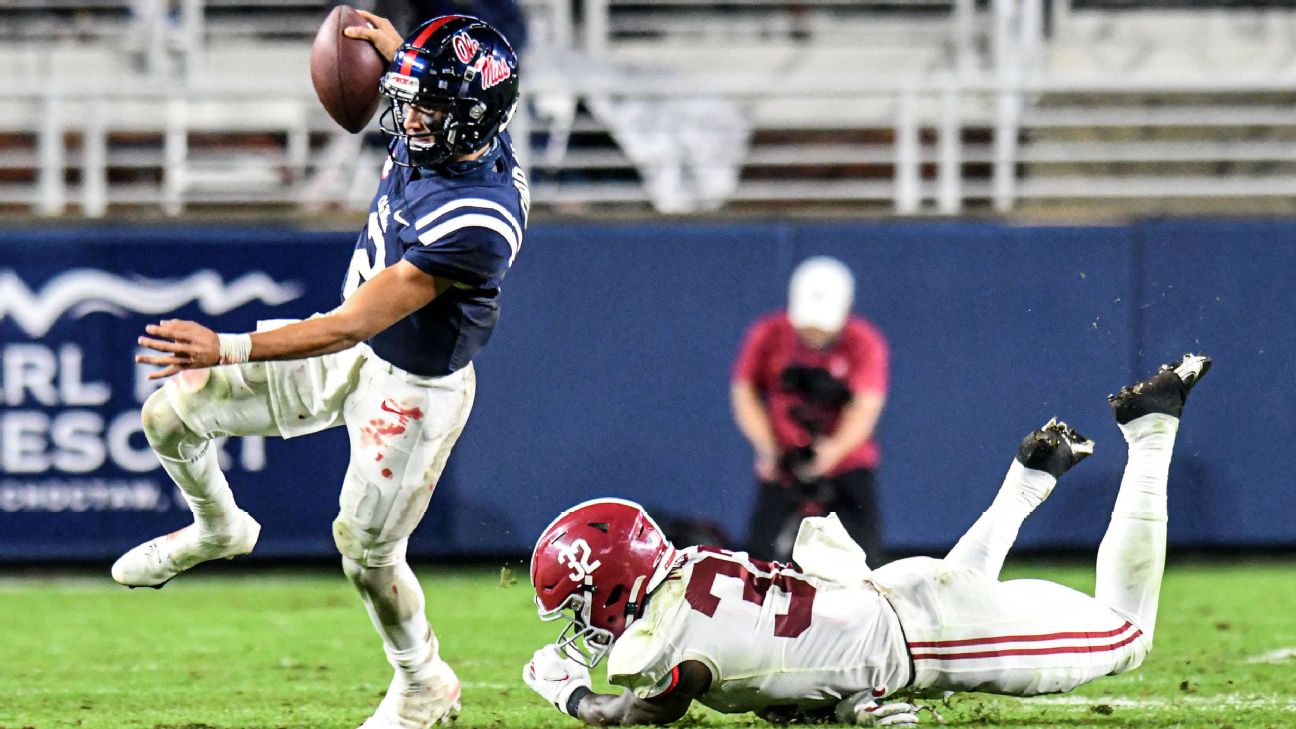 Ole Missvisits Alabama on Saturday in what should be one of Week 5's most exciting games.

On one side, you have Lane Kiffin's offense, led by Heisman contender Matt Corral, fresh off of a bye week and a 61-21 stomping of Tulane the week before that. On the other, you have one of the most impressive dynasties in all of sports -- professional or college -- in Alabama.


Alabama leads the series between the teams 52-10-2. It's not necessarily a rivalry by any means, but with both teams looking as good as they have, and the history between the coaches, we're set up for a fun afternoon in Tuscaloosa between these two.

While we could go on about why the game is going to be interesting, everything else about the relationship between the coaches is more fun. These are the best moments, quotes, and more from Nick Saban and Kiffin.

One of the most memorable moments in Saban's and Kiffin's relationship was when Kiffin served as the team's offensive coordinator in 2016. The Tide were playing Western Kentucky, up 35, and there was less than a minute remaining.

When Saban didn't like a playcall by Kiffin that resulted in a fumble that led to a touchdown, Kiffin heard it from Saban.

When asked about the argument, Saban said, "There are no arguments," he said. "Those are called ass-chewings."

A couple of years later when Brian Daboll was on the wrong side of one of Saban's chewings, Kiffin was happy to point it out.

Before Alabama's national championship game against Clemson in 2016, Kiffin was named the next coach at FAU.

A week after Kiffin missed the team bus in Atlanta after beating Washington in the Peach Bowl, he was told he would no longer be a part of the team's traveling party. Kiffin was let go early, and Steve Sarkisian was named Alabama's offensive coordinator.

Alabama ended up losing a 10-point, fourth-quarter lead to Clemson in the title game just a week later.

After Kiffin's time at Alabama, he was still in the business of poking fun at Saban. In 2017, Saban told the media, "All that stuff you write about how good we are? All that stuff they hear on ESPN? It's like poison. Like rat poison."

Kiffin ran with it.

And ran with it.

Kiffin recently explained why he appreciates the rat poison phrase. "I just think it's really good, especially the way he explained it," Kiffin said Monday. "It's like drinking rat poison. That's pretty good."

Most recently, Kiffin downplayed any talk of Alabama's dynasty going away because of the Tide's ability to use the transfer portal to add even more talent to their already impressive recruiting pool.

"Now they go to cherry-pick players for any holes they may have like an Ohio State receiver [Jameson Williams] or a Tennessee linebacker [Henry To'o To'o]," Kiffin said. "So now, it's like not only do they get the best draft picks but they get to go into free agency and take players, so it really is going to set up one of the most talented teams ever, which is what we're getting ready to play."

Whether or not Kiffin actually believes 2021 Alabama to be one of the best teams ever is one thing, but we do know that Saturday's matchup should be a fun one.

Hottest rivalry in the game

Three days after SMU's 42-34 win over TCU in the 100th edition of the Battle for the Iron Skillet, the rivalry is hotter than it has been in years. SMU ran for 350 yards and didn't allow a sack against the Horned Frogs of coach Gary Patterson, one of the country's best defensive coaches.

Afterward all manner of nonsense has broken loose:

After the game, SMU receiver Rashee Rice tried to plant an SMU flag, which was rather uncouth, no doubt. A fracas followed, during which TCU assistant Jerry Kill fell and suffered a concussion, according to Patterson. Understandable that Patterson was concerned about Kill, who has been a longtime friend and has had issues with seizures. But ...

Patterson accused an SMU player of hitting Kill with a helmet. Video showed a TCU player bumping into Kill and the coach falling down.

Patterson seemed irked that SMU tweeted a video last year after TCU had to cancel the game. "I saw coach [Sonny Dykes] fry frog legs in the skilletwhen we couldn't play them."

Dykes apologized for the flag incident and reiterated his respect for Patterson and TCU after the game. Then on Tuesday, Patterson doubled down, reiterating that he's not mad, he just thinks it's funny, according to the Fort Worth Star-Telegram:

Patterson said the flag incident was planned in SMU's offices because a videographer was filming it. "It's OK," Patterson said. "But don't tell me there wasn't a plan somewhere there." (SMU denies this, saying there are videographers around shooting its ESPN+ show.)

"We have rivalries. People get to where they hate you," Patterson said. "I giggle. You know what? That's what you want to do. You want to win enough that people hate you."

Patterson was upset SMU made a Twitter parody video -- he really doesn't seem to like those -- of a song he recorded last year, saying he'd invoke copyright lawyers if he had the time.

No. 8 Arkansas at No. 2 Georgia (Noon ET, ESPN): The Razorbacks' revival has already thrown a wrench into Steve Sarkisian's first season at Texas and Jimbo Fisher's hopes to contend for an SEC title this year at Texas A&M. Hogs coach Sam Pittman, who spent four years as an assistant to Kirby Smart in Athens, knows what he's up against. And then there's the matter of history: The Hogs haven't won a top-10 matchup on the road since beating No. 1 Texas in 1964. Here's what to watch: Georgia has gone 35 straight games without allowing a team to run for 200 yards in a game. Arkansas has rushed for 200 yards in three of its four games this year, and finished with 197 in the other one. Texas A&M might not be on Georgia's level yet, but the Aggies are built almost like a Georgia Lite, with a power running game and a stout defensive line. The Razorbacks had no problem standing up to either Texas or Texas A&M. Georgia could be a different story. But either way, the Razorbacks are quite a story this year.

Texas at TCU (Noon ET, ABC): Now that we've established what TCU is currently going through, allow us to point out that Texas is averaging 47 points per game this season, even after scoring just 21 in a loss at Arkansas. Patterson is 6-1 against Texas in their past seven meetings against the Longhorns, however. He'll need to round his defense into shape quickly, though, because the Frogs have allowed 1,037 yards of offense in their past two games against Cal and SMU. The Mustangs had two running backs go over the 100-yard mark and Bijan Robinson is coming to town.

Indiana at No. 4 Penn State, (7:30 ET on ABC): Four weeks into the season, and any hopes of the Hoosiers carrying 2020 momentum into 2021 are gone. However, they still have the potential to be a pain in the behind of anybody in the Big Ten, which Penn State knows well from 2020's infamous game in which Michael Penix Jr. heroically reached for the game-winning touchdown. Such a play seems unlikely to happen in Saturday's game, but this season has been mostly unpredictable so far.

No. 6 Oklahoma at Kansas State (3:30 ET, Fox): What do we know about Oklahoma? These are not the Sooners of old, lighting up scoreboards while holding on for dear life on defense. Under Alex Grinch, the Oklahoma D, especially last season, has been salty. But this year, the Sooners have beaten three FBS teams by a combined 15 points and the defense is coming up big. Spencer Rattlerhas been pedestrian. Lincoln Riley swears they're just a few ticks off and will get there. But he also said this is a case where a quarterback is playing to win, managing the game and letting the defense also do its part. Facing Kansas State in Manhattan in the Sooners' first road game since announcing they're leaving the Big 12 is dangerous, and the Sooners know it, because the Wildcats have upset the Sooners each of the past two seasons (48-41 in Manhattan, 38-35 in Norman). Since 2019, K-State coach Chris Kleiman has eight wins as an underdog, most in FBS in that span. The Sooners are 7-point favorites, but this sure has the look of another nail-biter.

No. 7 Cincinnati at No. 9 Notre Dame (2:30 ET, NBC): Indiana wasn't the playoff résumé-building game Cincinnati hoped it would be, but a win over No. 9 Notre Dame would certainly look good. The Irish are coming off of a strange 41-13 win against Wisconsin, a final score that doesn't reflect just how close of a game it was. The Bearcats have had an extra week to prepare for the Irish, which will be one of their biggest road tests of the year.

No. 14 Michigan at Wisconsin (Noon ET, Fox): The Wolverines are probably facing their toughest test on Saturday in Wisconsin, but it's a low bar to clear. A 31-10 win over Washington isn't the impressive win it appeared it would be in the offseason, and a 20-13 win over a then 3-0 Rutgers isn't raising any eyebrows. After Wisconsin's struggle against Notre Dame last week, this game probably wouldn't impress either, but you can only play the games on your schedule. However, Michigan is emerging as a Big Ten favorite, so you gotta give the Wolverines some of your time on Saturday.

No. 10 Florida at Kentucky (6 ET, ESPN): The Wildcats snapped their 31-game losing streak to Florida in 2018 with a win in Gainesville. Saturday, the two face off with Florida's only loss being a 31-29 contest against Alabama, and Kentucky a clean 4-0. The Gators will certainly be favored in this one, but the chances of it being fun are high. Tune in.

No. 21 Baylor at No. 19 Oklahoma State (7 ET, ESPN2): Now this is fun. For the first time since the Big 12 started in 1996, both of these teams enter a matchup between them undefeated. Baylor is emerging as one of the surprise teams in a surprising season, knocking off Iowa State last week after finishing 2-7 in 2020. The one thing we know about Mike Gundy's OSU teams is that they're always capable of a run. Spencer Sanders was incredible in last week's win over No. 25 Kansas State, going 22-for-34 for 344 yards and two touchdowns.

Boston College at No. 25 Clemson (7:30 ET, ACC Network): The Tigers might not be the playoff contender most thought they would be, but their downfall is just as much of a reason to watch them. They welcome a 4-0 Boston College team that gave them a run for their money in 2020, and Clemson hasn't shown many signs of turning things around. Keep an eye on what's going on in Death Valley. 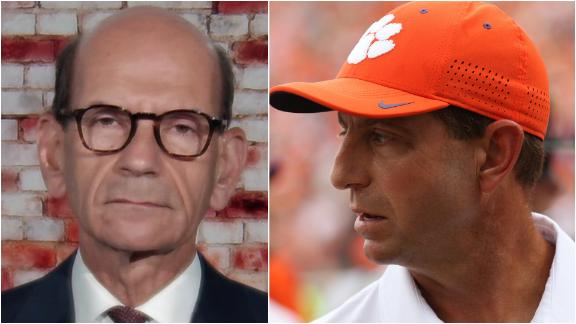