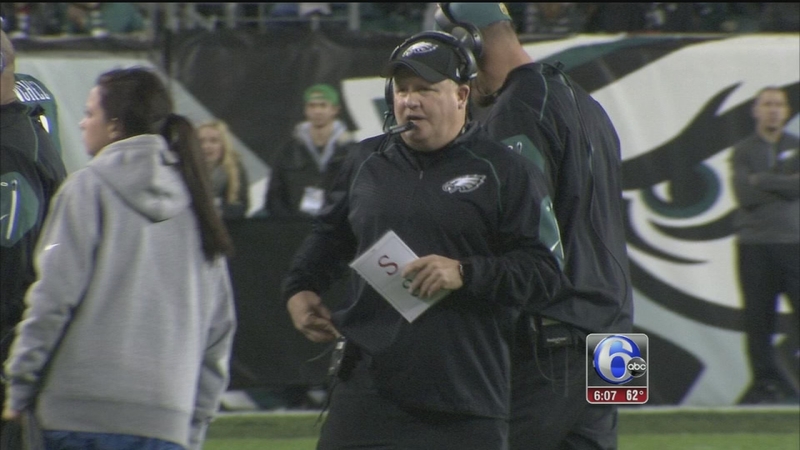 UPPER DARBY, Pa. (WPVI) -- Customers filed into the Llanerch Diner in Upper Darby on a soggy Sunday morning, ready for a hearty breakfast after an ugly Eagles loss to the Redskins.

"Started off awesome. But then we just went down," said Vivian Luke of Overbrook Park.

The Eagles scored early in the first quarter with a Ryan Mathews touchdown, but that's the only time the birds would have the lead.

Many mistakes led to the 38-24 final score - a loss that knocks the Eagles out of the playoffs.

And the blame is falling squarely on the shoulders of head coach and general manager Chip Kelly.

"I think there's more to being a general manager than just going out and getting high-priced free agents," said Joe Missanelli of Havertown, Pa. "We didn't go from good to great is what he wanted to do."

"They got rid of Andy Reid to get a chipmunk. And for what reason? Nothing's improved," said Luke.

While many people blame Chip Kelly for the Eagles less-than-stellar season, not everyone says Chip Kelly needs to go.

But everyone we spoke with says something needs to change for the Eagles before next season.

"I like Chip Kelly, I'd like to see him stay, but I don't know if him being the GM and head coach is too much for him," said Joe Gordon of Drexel Hill, Pa.

Gordon and his son were at the game on Saturday. He said hopes were high before the game, but things turned sour in the second half.

"They started to stall, and then the mistakes started to happen one after another ... penalties, just a lot of mistakes," said Gordon.

While there's still one more regular season game for the Eagles - next week's matchup against the Giants - fans are already looking forward to a fresh start and different sport.

"It's only, what, December? But I'm ready for spring. I want to hear a crack of a bat," said Mary Missanelli of Havertown, Pa.