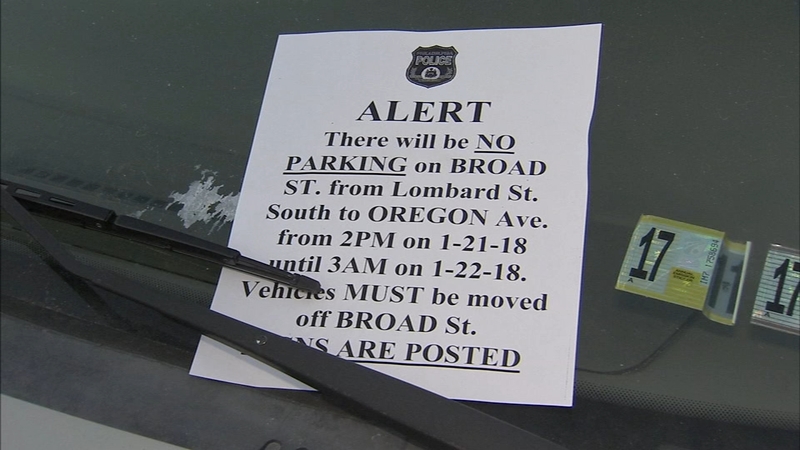 PHILADELPHIA (WPVI) -- There is a vibe running through the city Friday night that we have not seen in some time.

This city is pumped. There is a connection that seems to be universal.

And it's all focused on the Eagles winning this thing on Sunday.

Philadelphia police get that and they want everyone to be safe.

Ed Costello of South Philadelphia said, "I've been feeling the vibe since the beginning of the season.

Justin Foschini of South Philadelphia adds, "I feel the energy, it's going to be great, we all got faith in Foles."

"I know the Eagles are going to the Super Bowl." Really? "Yep, confident," said Nicole Cannizzaro of South Philadelphia.

And at the Vegan Commissary on Wolf near Broad, they were stirring the pot for the Eagles with special plans on Sunday.

Steve Laurence, Vegan Commissary said, "We're doing chili cheese dogs, we're gonna do a special because of the 'Underdogs.' Yeah, so we have a special on and we're selling our Super bowl package at a discount this weekend cause we know the Eagles are going to the Super Bowl.

Meanwhile, the concern for Philadelphia police is will an Eagles win Sunday ignite raucous street celebrations like these after the Phillies won the World Series. They are taking no chances. They will have a beefed-up presence at historic hotspots like Frankford and Cottman and of course, South Broad Street.
Police say there will be no stupid behavior permitted.

With that in mind, flyers were being placed on cars announcing there will be no parking allowed on South Broad from Lombard to Oregon from 2 p.m. Sunday until 3 a.m. Monday.
That means parking in South Philadelphia which is very tough as it is will be even tougher on Sunday.

But folks are taking things in stride.

Melanie Grimes of South Philadelphia said, "I don't think it will be too bad... we adjust in South Philly, we're used to it."

It promises to be quite a weekend. Have fun, be safe and go Eagles!