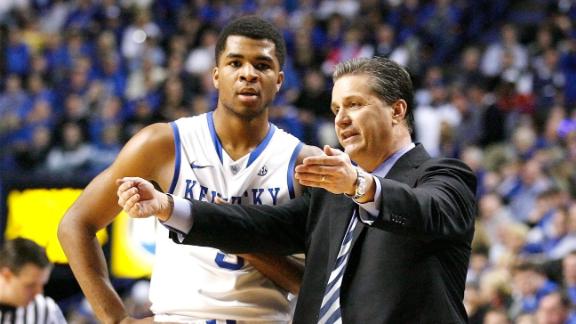 The event will allow the Wildcats to showcase their players and eliminate the distraction of NBA scouts visiting throughout the season, and it will inevitably be a recruiting tool for Calipari for future classes.

One NBA executive told ESPN.com that the event, to be held Oct. 10-11, is a "great idea" because scouts can make their observations in one weekend and it "limits the parade of NBA guys in practice."

The Wildcats have nine McDonald's All Americans on their roster this season -- only Duke has as many -- and could match the 2011-12 team, which had six players taken in the NBA draft including top overall pick Anthony Davis.

ESPN Insider Chad Ford ranks Karl-Anthony Towns, a 7-foot freshman center, as the No. 3 prospect for next year's draft and said he could make a play for the No. 1 spot.

Junior Willie Cauley-Steinreturns, and sophomore Dakari Johnson, sophomore guards Andrew Harrison and Aaron Harrisonand junior power forward Alex Poythress could end up declaring at the end of the season. Cauley-Stein and Johnson are both 7-foot centers.

The players will go through combine-style drills and measurements and also play full-court 5-on-5 games with officiating, according to a source.

Throughout the season, scouts generally arrange to visit practices and attend games but are barred from interacting with players. Because of the amount of NBA prospects on its team, Kentucky would receive more inquiries than most programs this season.

Yahoo! Sports, which first reported the story, has also reported that Calipari would block scouts indefinitely from visiting practices during the season.