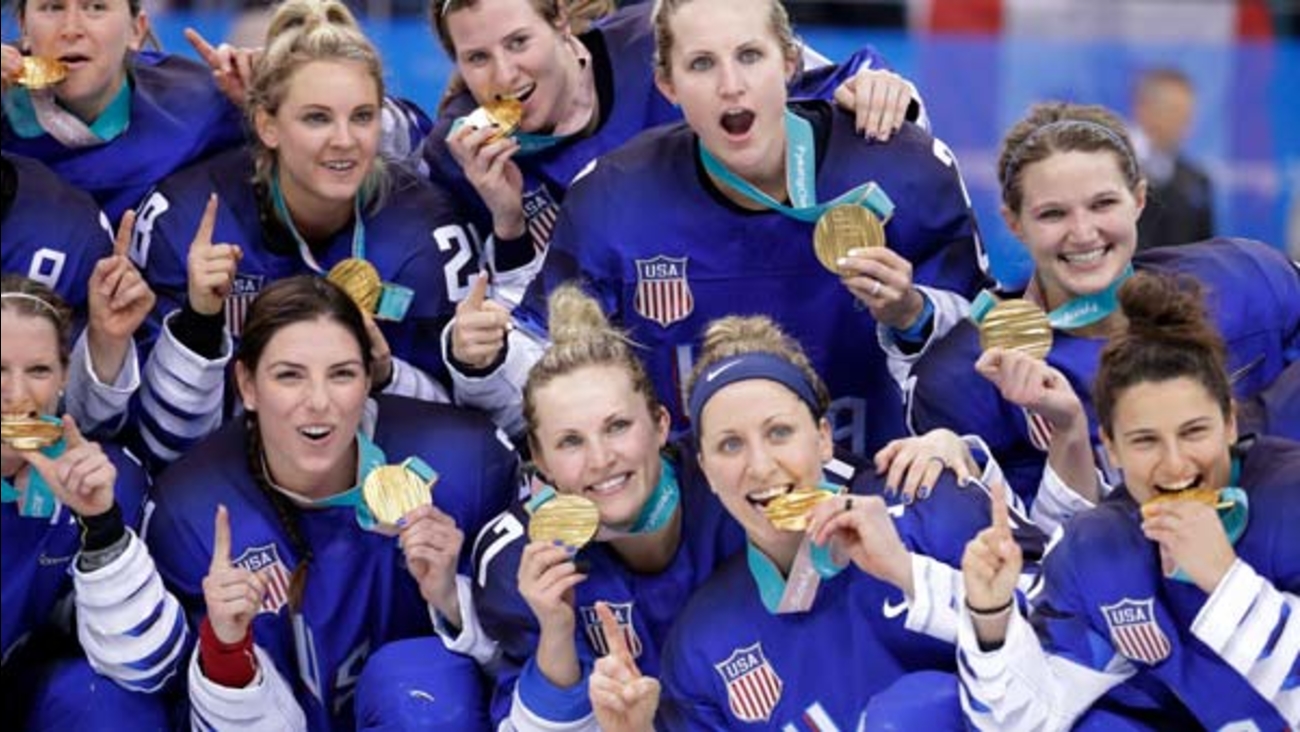 GANGNEUNG, South Korea -- The Americans' gold medal drought is finally over. They needed the first shootout in an Olympic women's final to do it, too.

Jocelyne Lamoureux-Davidson scored a dazzling, triple-deke goal in the sixth round of a shootout thriller and Maddie Rooney stuffed the last two Canadians to wrap up a 3-2 victory over archrival Canada on Thursday.

The Americans piled over the boards, throwing gloves in the air before huddling and hugging on the ice - 20 years after the women's last gold medal in women's hockey and 38 years to the day after the men's famous "Miracle on Ice" victory over the Russians in group play at Lake Placid.

"I can't put it into words," defenseman Kacey Bellamy said. "This whole year is for everyone that came before us. This is for Julie Chu (former USA team captain) and for all our families at home, the schools that we went to, everyone supporting us."

Lamoureux-Davidson's shootout goal was the talk of the game. She feinted a wrist shot, then drew Szabados out of the net by faking a backhand and came back to slide the puck past Szabados' outstretched leg into the open net for the clinching score.

Her twin, Monique Lamoureux-Moranda, said coach Peter Elander, now at Ohio State, had taught the sisters the shootout move when the three were at the University of North Dakota.

"Not everyone can take the pressure like that and she took it like a champ," she said.

Gigi Marvin and Amanda Kessel also scored in the shootout, another nail-biter ending four years after Canada won its fourth-straight gold medal in Sochi after rallying to stun the Americans in overtime.

Monique Lamoureux-Morando tied it up with a breakaway with 6:21 left in regulation . Hilary Knight also had a goal and Rooney was spectacular, making 29 saves for the win. The 20-year-old goalie stopped the last two Canadian shooters in the shootout in Brianne Jenner and then Meghan Agosta on her second attempt.

It was sweet redemption for the 10 Americans who watched the Canadians snatch gold away in Sochi. Not only did the Americans end the Canadians' stranglehold on Olympic gold, they ended a skid of five straight against their rival coming into this game, including a 2-1 loss in the tournament a week ago.

"It is everything for our country," U.S. coach Robb Stauber said. "I am just so thankful for the outcome. It was a thrilling final. It was unreal."

Marie-Philip Poulin and Haley Irwin each scored goals for Canada. Agosta and Melodie Daoust scored in the shootout.

The Canadians, who had pushed the Americans around for much of the game and taken penalties for it, wept on the ice as they accepted their silver medals. Jocelyne Larocque took hers off immediately and held it in her hands as the Americans stood nearby awaiting their gold.

"It's just hard," Larocque said. "You work so hard. We wanted gold but didn't get it."

Added Canada coach Laura Schuler: "There's not a lot of words that can describe how you feel. It was a great game of hockey. It's what we expected: back and forth hockey."

The Americans had dominated the women's game in non-Olympic years, winning the last four and eight of the last 10 world championships, including a 3-2 overtime victory over Canada last spring.

It only made the lack of gold at the Olympics all the more noticeable, and Canada has been in their way since losing the inaugural gold in Nagano in 1998. Canada had won 24 straight Olympic games to go along with those four consecutive gold medals - a streak of success in a women's team sport second only to the U.S. basketball team's current streak of six straight gold.

This was the eighth time these North American rivals had met in the Olympics and the fifth with gold on the line. None of the previous seven was decided by more than two goals.

U.S. coach Robb Stauber went with Rooney in net for the biggest game of her career - the goalie for each of the three wins against Canada last fall during a pre-Olympic exhibition tour.

Canada had Shannon Szabados in goal for her third Olympic gold medal game, and her teammates made her job very easy by keeping the puck in front of Rooney for most of the first period by dictating play. The Americans couldn't use their speed or get organized even with two power plays until Sarah Nurse went in the box for interference late in the period.

Knight gave the U.S. a 1-0 lead with 25.4 seconds left in the first, redirecting a shot from Sidney Morin through Szabados' pads to give the Americans a jolt of energy.

That lasted only 2 minutes into the second when Irwin tipped a midair pass from Blayre Turnbull over Rooney's left leg for Canada. And when Morin lost the puck, Melodie Daoust grabbed it and passed to Meghan Agosta who hit Poulin for the wrister into the left side of the net at 6:55 for a 2-1 lead.