WPVI
By Trish Hartman
CENTER CITY (WPVI) -- A violent attack outside a bar in Center City Philadelphia is under investigation, and police are trying to figure out if the victim was specifically targeted.

The attack happened around 11 p.m. Sunday outside the Toasted Walnut in the 1300 block of Walnut Street.

The bartender who was working that night, Josh Schonewolf, originally told Action News that he saw what happened.

"All of a sudden a car full of guys decided to jump out and attack one of the patrons here right in front," he said after the incident.

But now, in a Facebook post, Schonewolf admits he was inside the bar and didn't see the attack.

He says in part, "I jumped the gun, plain and simple ... I never saw a car, and I never saw the altercation itself happen."

Schonewolf also says in the post, "I was just trying to help, catch the guys who I thought committed a gay bashing & punched one of my friends." 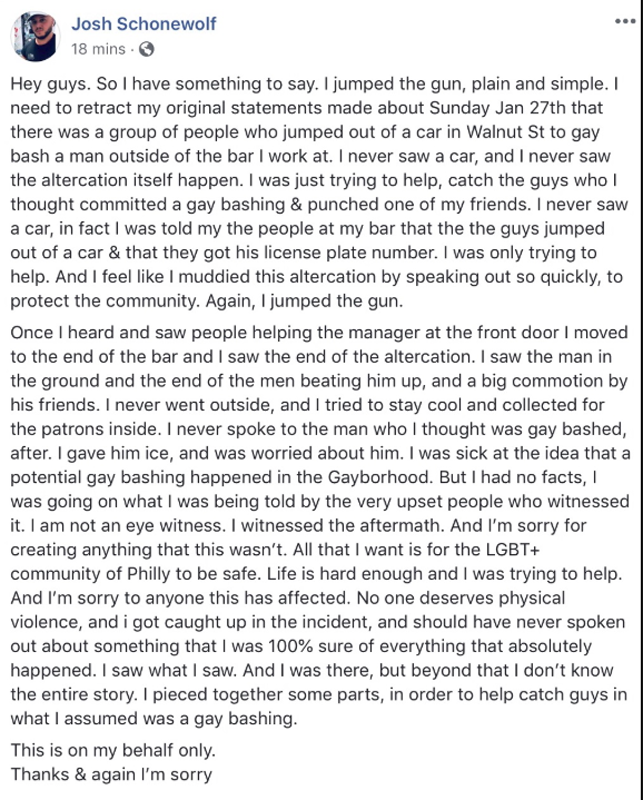 Here are the facts we know from the police. They tell us the 50-year-old victim was jumped by four men and a woman.

They say the suspects jumped into a vehicle and fled before officers arrived. The victim was sent to the hospital and treated for a head injury.

People talking about this incident on social media have mentioned a similar attack on Saturday in the same area.

As for whether or not this is being investigated as a hate crime, Philadelphia Police say a hate crime charge may be added after they have done their investigation.

The district attorney's office will make that determination. We tried to check with police about whether this new development would change their investigation. So far, they will not comment.

Amber Hikes, the Executive Director of the Mayor's Office of LGBT Affairs, issued the following statement on Tuesday evening:

"We're working closely with the police department, victim services, witnesses, and business owners in the area to determine what transpired."