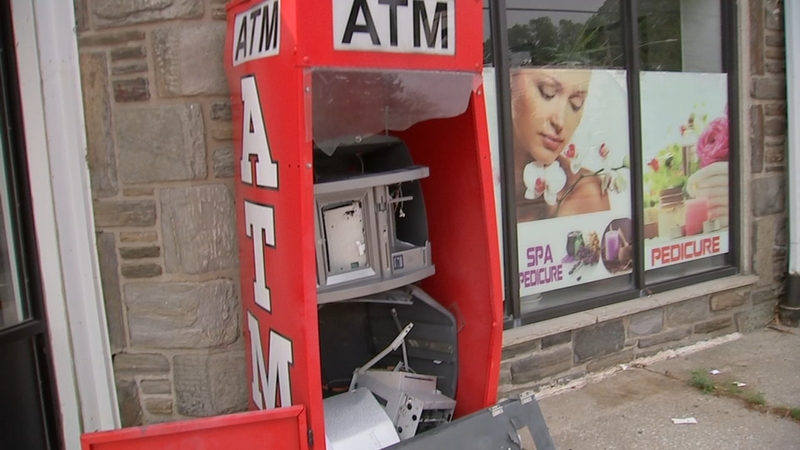 DREXEL HILL, Pennsylvania (WPVI) -- Ryan Ritz got a rude awakening at around 5 a.m. at his home near Drexel Avenue and Township Line Road.

"When they say this hits close to home. This is literally as close to my home as it can get," he said.

Ritz heard a loud boom that he says shook his entire house. When he looked out the window, he saw smoke coming from the area of an ATM that had been targeted in an explosion.

Police say the targeted explosion happened between 4:30 and 5 a.m. Wednesday in the 4300 block of Township Line Road.

Residents saw smoke as a car sped away with the money box from inside the ATM.

However, the heist was hardly worth it. Police say the money box was empty and the thief got nothing.

This is the first ATM attack in Drexel Hill, but it's not the first in Philadelphia.

At around 11 p.m. Tuesday, thieves targeted an ATM outside a deli at 26th and Brown Street in Fairmount.

After the owners cleaned up, they brought what was left of the ATM inside the deli. Police say the explosion was so powerful that investigators found pieces of the ATM several blocks away.

ATF sources estimate there may have been as many as 50 ATMs targeted in Philadelphia this week. It happens as looting continues across the area.

"I don't necessarily agree with all of the looting. I think it's taking away from the real message," said Teague Eppright of Drexel Hill.

Zabel lives in the area that was a targeted Wednesday morning. He says he plans on talking to the mayor of Upper Darby Township to come up with a solution.

"Free-standing ATMs, for example, we'll have to talk about what to do with those in the short term because they appear to be targets," he said.

Upper Darby Police are looking at surveillance video from a camera above the ATM. Investigators will zoom in on the footage to get a good look at the getaway car and possibly the suspect or suspects.