It's Finally Opening Day 2020 for the Phillies! 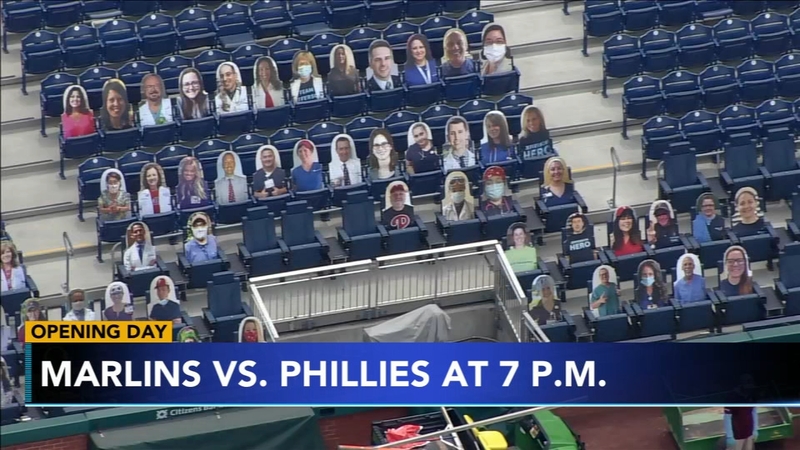 It's Finally Opening Day 2020 for the Phillies!

Phillies Starter Jake Arrieta says feels like an accomplishment just to get here after everything they've dealt with the last four months.

Bryce Harper and the Phillies open the season Friday at home against the Miami Marlins at 7:05pm.

"I'm really excited. We need to go out there and play our game and not really worry about if there is anybody in the stands or not, nobody can change that," Harper said.

Normally for a season opener it would be packed at the ballpark with fans tailgating with a buzz in the air. But this, of course, is not a normal year; playing during a global pandemic.

Citizens Bank Park is ready for Friday's opener but of course there will be no fans in the stands.

The Phillies will have cardboard cutouts of first responders behind home plate and have opened up that availability for all fans to have their face in the stands with proofed a going to charity.

The Phillies are trying to make the most of it after spending the last three weeks here for summer camp.

The Phillies are excited to get this 60 game season underway, and finally Joe Girardi will make his much-anticipated debut as Phillies manager

It is crucial - with only 60 games and 66 days - for the Phillies to come out to a red hot start.

To help their cause, MLB announced last night they will expand the playoffs to 16 teams, so the Phillies shot is much better despite a tough schedule only against the NL East and AL East teams.

"I just want to be able set this organization up in the long term and the long haul and try to win as many games as we can and get back to the good days of '08 and '09 and winning World Series," Harper said.
Report a correction or typo
Related topics:
sportssouth philadelphiaaction news sportsphiladelphia philliesmlb
Copyright © 2021 WPVI-TV. All Rights Reserved.
TOP STORIES
Pfizer submits data to FDA on its COVID vaccine for kids 5-11
QB Hurts says Eagles' MNF loss to Cowboys all on him
'Beat by Dallas,' Cowboys have fun at Eagles coach Sirianni's expense
Man found dead in restaurant vent after burglary attempt: Police
AccuWeather: Few Gusty Thunderstorms Today
One Liberty Observation Deck now permanently closed
Philly schools Superintendent Dr. Hite will end tenure next year
Show More
'Near certainty' Delco officers shot girl after football game: DA
2021 on pace to be Philadelphia's deadliest year in decades
NJ governor race: Murphy, Ciattarelli to face off in debate tonight
Philadelphia Flower Show staying outdoors for 2022
R. Kelly found guilty on all counts in sex trafficking trial in NYC
More TOP STORIES News