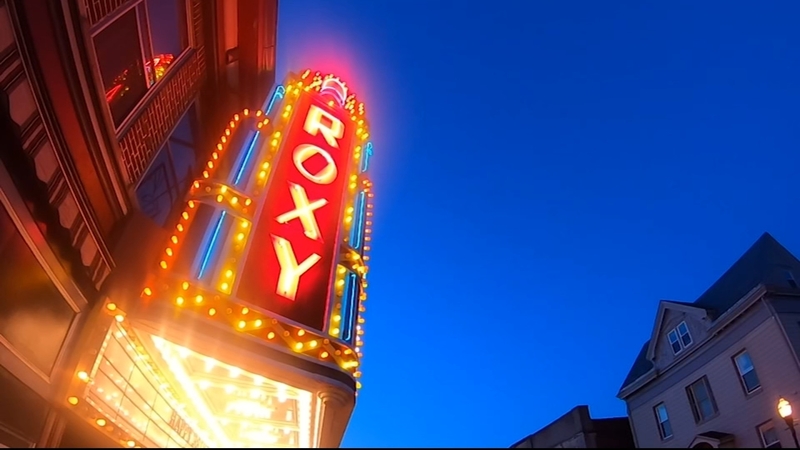 NORTHAMPTON, Pennsylvania (WPVI) -- There's so much history and nostalgia in the old-time movie theaters.

Few and far between, there's one such treasure where the lights on the marquee still shine brightly, at least for now.

There's quite a story of survival to tell for the Roxy Theatre in Northampton thanks to one man who is keeping the projectors rolling.

Rick Wolfe has been the front and back of house, and everything in between, for 50 of Roxy's almost 100 years.

When most theaters have gone dark in this pandemic, he's finding ways to save his labor of love to preserve this treasured Lehigh Valley gem.

"I always was fascinated as a youth going to the movies at the big old downtown movie palaces," Wolfe says.

And that's exactly why Wolfe bought the Roxy back in 1970.

"I was 21 at the time I took over this theater," Wolfe says.

Originally a Vaudeville theater, Wolfe has been restoring this tiny jewel box to its former Art Deco glory.

"Going to the theater was a very unique experience, it was special because the theaters were so grand and so opulent," he explains.

He started the Roxy's resurrection with the marquee.

"There's 700 and some bulbs on that marquee. Thirty-eight of them lit up when it was turned on and it didn't even look like it was on," said Wolfe.

Wolfe is the Roxy.

"I'm the manager, the projectionist and on some days, also the ticket taker," he says. "Right now I'm everything!"

The Roxy is etched in history as the longest-running dollar theater in America. Currently $3 a ticket, like other venues, 2020 has left it in the dark.

Wolfe had to get creative to keep the theater from shuttering. He started renting it out for smaller, intimate screening parties.


"A birthday party, anniversary or just the family," he says, can be celebrated there, within Covid-19 guidelines and regulations.

"People asked me if they could put a message up on the marquee," he says, adding that you can get your name in lights.

At 71 years young, Wolfe has no plans to part with the Roxy.

"I have no interest in retiring at this point. As long as I'm healthy, what else would I do?" he says.

After all, it's been 50 wonderful years and counting.

The Roxy turns 100 next year. Wolfe says he's doing everything he can to meet that milestone and hopefully celebrate with the big bash it deserves.
Report a correction or typo
Related topics:
arts & entertainmentpennsylvaniaentertainmentmovie theatersocietyhistorycommunity
Copyright © 2021 WPVI-TV. All Rights Reserved.
More Videos
From CNN Newsource affiliates
TOP STORIES