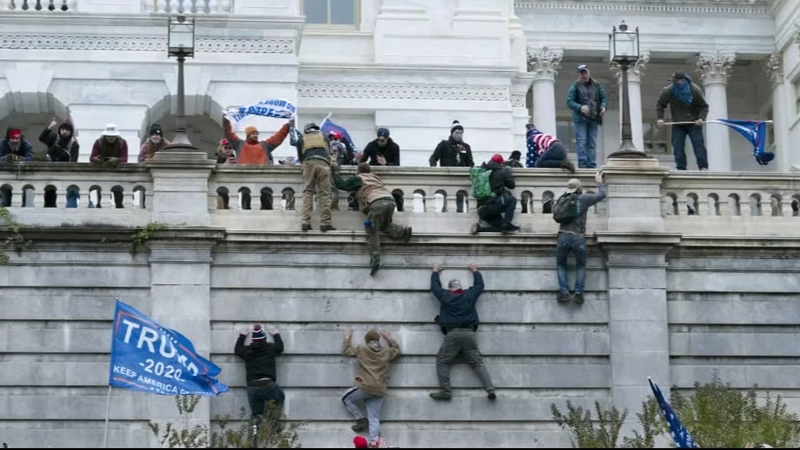 PHILADELPHIA (WPVI) -- In the wake of a violent mob's takeover of the U.S. Capitol Wednesday, many Democrats are demanding repercussions. While party leaders are calling for invoking the 25th Amendment and drafting articles of impeachment, law enforcement is in charge of consequences for the masses.

D.C. police have arrested at least 68 people and Capitol police arrested another 14, the agencies said Thursday. Twelve of those arrested were from Pennsylvania and one person was from South Jersey.

RELATED: Congress confirms Biden's win after Trump mob storms Capitol in DC; 4 dead after siege
D.C.'s Metropolitan Police Department released a list of suspects and the crimes they are arrested on suspicion of. The charges include:

However, that's likely not the final nor full list of charges arrested suspects will face. Police and prosecutors can add to the list of crimes as the investigation unfolds and suspects are formally charged.

Here's a full list of residents arrested from the Pennsylvania area:

Leonard Guthrie, Cape May, NJ was arrested by the US Capitol Police on unlawful entry charges.

The Metropolitan Police Department is asking for the public's help identifying another several dozen "persons of interest" seen in viral news photos from Wednesday's chaos. The photos show the suspects vandalizing the Capitol and posing for photos in the legislative chambers.
Chief Steven Sund said rioters "actively attacked" Capitol police and other law enforcement officers with metal pipes, discharged chemical irritants and "took up other weapons against our officer."

MORE: President Trump says his term is ending, transition will be orderly

Despite those reports of violence, all the persons of interest listed are initially being sought for "unlawful entry" or "receiving stolen property" (in the case of one person photographed with a sign from Rep. Nancy Pelosi's office).