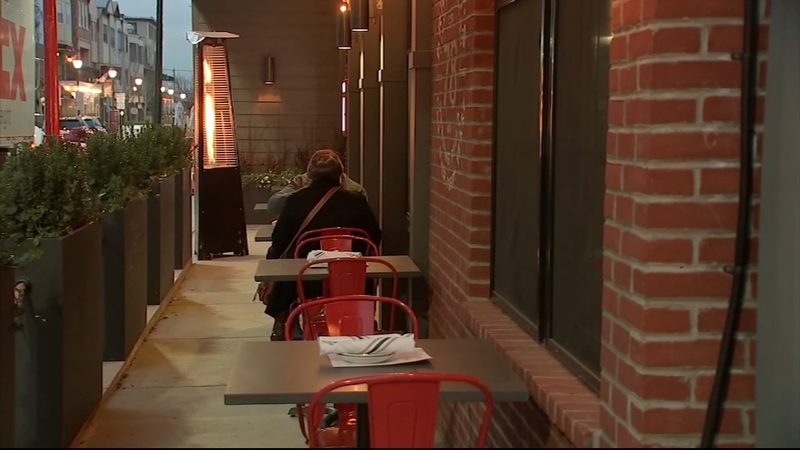 PHILADELPHIA (WPVI) -- While the COVID-19 pandemic has caused much stress on the restaurant industry, local owners say they are hopeful in 2021.

Though many say they could use a lifeline as they struggle to stay afloat with outdoor dining in the middle of the winter season.

Marc Grika, the owner of Flannel, a restaurant on East Passyunk that specializes in Southern comfort food, said it's been a challenge to break even and stay in business.

The city has welcomed the idea that if there isn't a spike in COVID-19 cases in the next few days, restaurants can reopen indoor dining at 25% occupancy on January 15.

"Great, anything will help without indoor seating. There's no way to break even," said Grika.

At Bridget Foy's in South Philadelphia, which features American cuisine, the city's announcement offered a glimmer of hope.

The Pennsylvania Restaurant & Lodging Association (PRLA) says of the 500 full-service restaurants in Philadelphia County, over 200 are closed right now, with 50 of them permanently.

The association says it has distributed over $300,000 to unemployed restaurant workers who are barely scraping by.

Meanwhile, people dining out in the cold shared their reactions to the city's announcement.

"I'm very excited for indoor dining opening back up as long as everything is safe," said Guillermo Roche of South Philadelphia.

Another South Philly resident Carrie Christiansen said, "They're doing everything they can to keep us safe, so as long as we're doing our part, I think it's a great thing for the city."

In Delaware, Governor John Carney announced that beginning Friday night, the 10 p.m. curfew has been lifted and restaurants can now stay open later, much to delight of restaurant owners.

"This is great news. We're very excited about it," said Ryan German, who operates Caffe Gelato, a fine dining establishment in Newark.

The governor's update read: "Beginning today, the 10 p.m. curfew at Delaware restaurants and bars will be lifted, but establishments still must have signage prominently displayed on the table stating that parties must be from the same household and share messaging on masking compliance."

German said the lifting of the 10 p.m. restriction is really going to help.