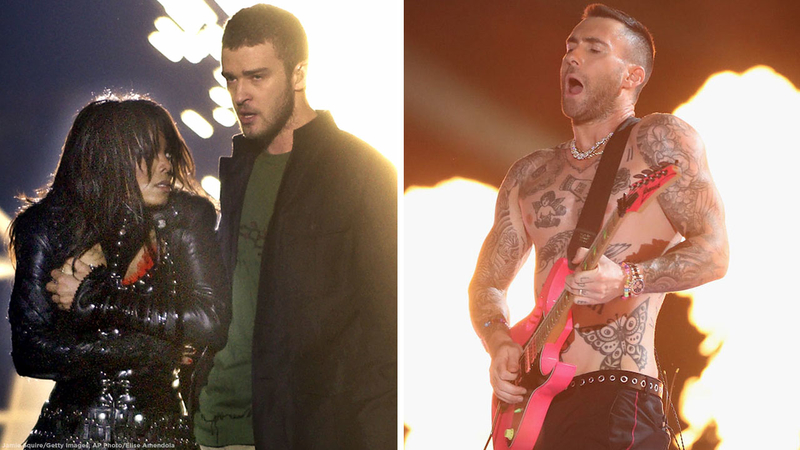 LOS ANGELES -- 2019 marks 15 years since the infamous "Nipplegate," but the NFL still can't seem to shake it.

For the second year in a row, the Super Bowl XXXVIII halftime show controversy has found its way back into the spotlight, this time after Maroon 5 frontman Adam Levine concluded the band's halftime show by performing "Moves Like Jagger" shirtless.

Social media lit up almost instantly with comparisons to the 2004's halftime show, when headliner Janet Jackson experienced a wardrobe malfunction that exposed her breast to the telecast's 143 million viewers, with some questioning why it was okay for Levine to perform shirtless while Jackson's exposed breast ignited a cultural firestorm.

Why is it okay to see Adam Levine’a boobs and not Janet Jackson’s?

Asking for a friend.

Poor Adam he showed his nips at the Super Bowl so now his career will be ruined like Janet’s. OH WAIT Never mind!!!!

Many who commented on the performance later took the time to clarify that they weren't criticizing Levine's shirtlessness but instead were commenting on the treatment that Jackson received following the 2004 show.

To this day, there's still speculation as to whether the incident was planned in some way or was merely an accident. Jackson told Oprah Winfrey in a 2006 interview that co-headliner Justin Timberlake was supposed to tear off a piece of her costume - their performance ended with the lyric "I'll have you naked by the end of this song" - but that more of her top came off than was intended, and her nipple was never supposed to have been visible.

Regardless of whether or not it was supposed to happen, it did - and it prompted more than 500,000 viewers to lodge formal complaints with the FCC, which later levied a historically large fine against CBS, the network that broadcast the Super Bowl that year. A court later overturned that fine, but CBS's then-corporate parent Viacom still paid out millions to settle other indecency complaints.

As for Timberlake and Jackson, though, the two artists had very different experiences following the halftime controversy: Timberlake escaped generally unscathed and continued on with his solo career while Jackson was left to battle an alleged yearslong television and radio blackballing that critics say likely impacted the performance of several albums she released in the years following the show.