Resettled Afghan refugee says transition isn't easy: "It's so hard to leave everything behind"

The Nationalities Service Center is trying to help Afghan refugees find housing in the Philadelphia area.
WPVI
By TaRhonda Thomas 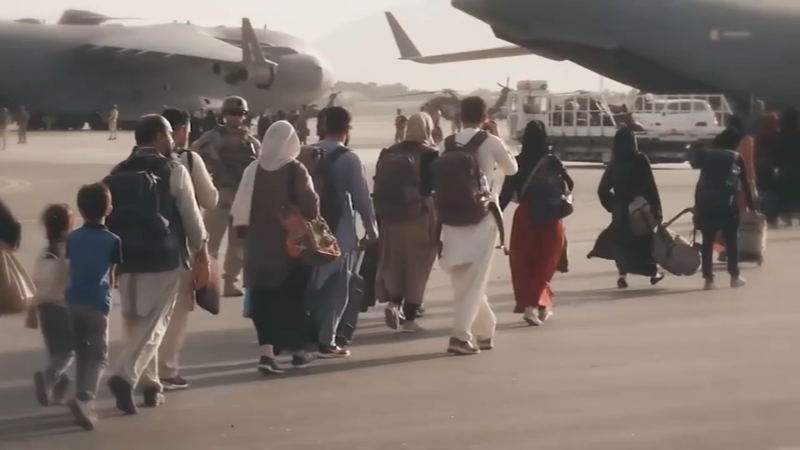 PHILADELPHIA (WPVI) -- As the first wave of refugees from Afghanistan arrived in Philadelphia this week, there's a good chance that some of them will end up in Northeast Philadelphia. That area is the part of the city with the highest population of refugees who have resettled, according to the Nationalities Service Center ( https://nscphila.org/ ), which helps refugees settle in the Philadelphia area.

One of the people working with those newly-arrived refugees is a woman who knows first-hand what they're going through.

"It's so hard to leave everything behind," said 39-year-old Yalda, a U.S. citizen and native of Afghanistan who came to America in 2013 after working as a translator and liaison for U.S. officials in her home country. Coming here, though, meant leaving everyone else behind.

Local organizations are preparing to receive Afghan refugees. Nationalities Service Center in Philadelphia has already helped four families in the last two weeks get acclimated to life on American soil.

"Family, friends, mom, brother, sister, I'm the only one here," she said.

Yalda knows the terror that people fleeing Afghanistan are feeling, as she prefers not to use her last name in interviews due to fear of the Taliban.

"All of my family relations are there (in Afghanistan). I do not want to put them in a situation," she said of the even bigger threat that the Taliban poses since taking over the capital of Kabul about two weeks ago.

She details stories from relatives in Afghanistan telling her that the Taliban has been kidnapping people at night and "they just disappear," she said.

"Everything is totally upside down in the country. The ones who even have their permanent resident card, they can't get to the airport because of the crowd," added Yalda.

That type of fear is what has pushed an untold number of people to the airport in Kabul, trying to flee the country. Yalda knows that if they are fortunate enough to leave and come to the U.S., they've got a long road ahead of them.

"It took me years to resettle," she said.

The first group of Afghan refugees to arrive in the Philadelphia area are starting their own resettlement process.

"They do not know how to speak, first of all, the language," she said, adding that every time she's helped refugees from Afghanistan resettle as part of the team with Nationalities Service Center, the refugees smile when they realize that she speaks their language.

Yalda says, in many cases, the refugees now leaving Afghanistan have waited in airports for days and have to leave nearly everything behind.

"They just have a 15-pound weight," she said of the weight limit on the sole bag that refugees are allowed to bring with them to start a new life in a place they've never seen.

Still, coming here means they no longer live in fear. Yalda remembers (before U.S. troops were stationed in the area) the Taliban taking over when she was in sixth grade forcing her to go to Pakistan and India for school. That education helped her become an interpreter and liaison after the 9/11 attacks.

SEE ALSO: Afghans who helped US military plea for escape: Taliban will 'cut our heads off'
EMBED More News Videos

"There was a lot going on to help with my country," she said.

As she works with Nationalities Service Center to help new refugees resettle, she can't help but think about her own family members who are still stuck in Afghanistan, wondering if they'll ever get their chance to leave.

"What's going to happen to the ones they leave behind?" she says.