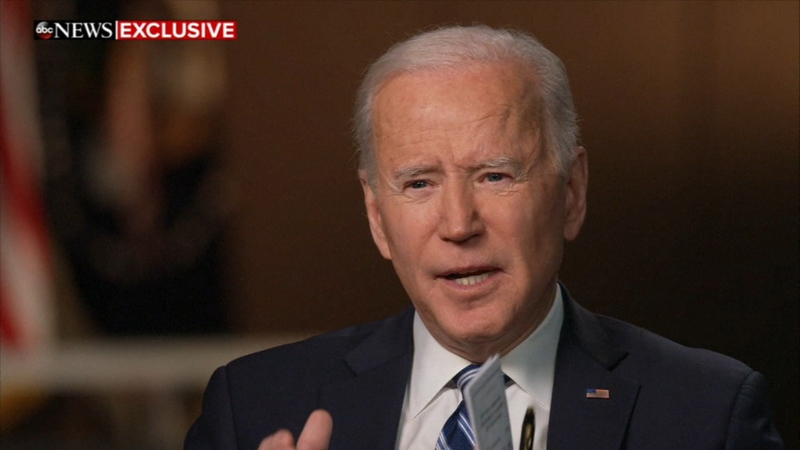 "I know you said you want the investigation to continue," Stephanopoulos told Biden, referring to a probe by New York's attorney general into allegations Cuomo had harassed several women. "If the investigation confirms the claims of the women, should he resign?"

"Yes," the president replied. "I think he'll probably end up being prosecuted, too."

Meanwhile, one of Andrew Cuomo's accusers appeared on a radio show to talk about her allegations against the embattled governor.
EMBED More News Videos

One of Andrew Cuomo's accusers appeared on a radio show to talk about her accusations against the governor.

Former aide Karen Hinton spoke out on radio station WNYC, saying Cuomo was "aroused" when he hugged her.

"He approached me and embraced me too tightly, too long, and was aroused," she said. "And I felt extremely uncomfortable and actually shocked by it."

U.S. Senate Majority Leader Charles Schumer repeated his call Tuesday for the governor to step down, saying Cuomo has lost the confidence of his governing partners.

Also, state Senate Majority Leader Andrea Stewart-Cousins reiterated her stance that Governor Cuomo should resign, but she said she would continue to work with him in the meantime.

"The governor is well-known for being who he is, and making sure that you know exactly what he feels," she said. "So this Andrew Cuomo is certainly somebody who I have met. But as I said, I don't get bullied."

Another former aide met with investigators Monday to discuss her accusations of sexual harassment.

Former aide Charlotte Bennett met with investigators via Zoom for more than four hours, with her attorney, Debra Katz, releasing the following statement after the questioning.

"She detailed her allegations of sexual harassment and provided the investigators with more than 120 pages of contemporaneous records, as well as other examples of documentary evidence, to corroborate her accusations against Gov. Cuomo and his senior staff," Katz said.

She says the investigators have been moving quickly -- and with sensitivity -- to get to the heart of the allegations.

"We remain confident that their investigation will substantiate Charlotte's claims of sexual harassment against Gov. Cuomo, as well as the failure of his senior staff to meet their mandatory reporting requirements under the very laws he signed," Katz said. "She also provided detailed information about the sexually hostile work environment the Governor fostered in both his Manhattan and Albany offices and his deliberate effort to create rivalries and tension among female staffers on whom he bestowed attention. One piece of new information that came to light today was the Governor's preoccupation with his hand size and what the large size of his hands indicated to Charlotte and other members of his staff. As we have said before, it is imperative that this investigation not only focus on Gov. Cuomo's actions, but also on the culture of fear, abuse and secrecy that he and his most senior staff cultivated. To that end, we have full confidence in the investigation and the investigators. We urge others who have been subjected to inappropriate conduct by the Governor - and we know you are out there - to come forward with what you experienced. And to those who observed the behavior, we urge you to do the same."

Late Monday, Jill Basinger, the attorney for Lindsey Boylan, another one of Cuomo's accusers, released a statement saying that she met with investigators last weekend.

"Ms. Boylan was interviewed last weekend by investigators assigned by the Attorney General's office," it read. "It is clear from the interview that the investigators are moving expeditiously and taking their work seriously. We are pleased with the scope of the investigation and the thoughtfulness and thoroughness of their questioning."

On Sunday, President Joe Biden passed up an opportunity to join other Democrats calling for Cuomo's resignation.

"I think the investigation is underway, and we should see what it brings us," he said.

"New York City has borne the brunt of the COVID crisis in our state, and we need the resources to drive a recovery for all of us, protect public health, keep New Yorkers in their homes and reopen our schools fully," the mayor said in a statement. "I am encouraged by the State Legislature's one-house budget resolutions, which include rental assistance for tenants and generating revenue by taxing the wealthy, while rejecting many of the Governor's ill-advised education and public health cuts. I applaud the Legislature for rejecting the Governor's proposals to subvert local control, especially over land-use and climate policies. I thank Senate Majority Leader Stewart-Cousins and Assembly Speaker Heastie for fighting for working people, and I look forward to continuing to fight for a State budget that puts our city on a path to a recovery for all of us."
Report a correction or typo
Related topics:
politicsnew yorkandrew cuomoscandalharassmentnew york state politicssexual harassmentnancy pelosicharles schumer
Copyright © 2022 WPVI-TV. All Rights Reserved.
TOP STORIES
AccuWeather Alert: Snowy Thursday Morning Commute
Police: Woman beaten to death with pipe in Old City
Woman stuck in bathroom for days gets saved by neighbor
2 dead, 3 firefighters injured in South Jersey crash
Philly officials announce increase of violence prevention resources
Supreme Court allows Jan. 6 committee to get Trump documents
US to distribute free at-home tests, N95 masks: What you should know
Show More
Starbucks no longer requiring US workers to be vaccinated
Biden, 1 year in, says nation weary from COVID but in a better place
Woman says someone followed her in Center City using Apple AirTag
Clue about Gov. Murphy stumps 'Jeopardy!' contestants
4 local hospitals getting some extra help due to staffing shortages
More TOP STORIES News