"The videos I saw don't explain what I saw in the morgue," Anthony Alvarez's mother said of the footage.
WLS
By Jessica D'Onofrio, Chuck Goudie 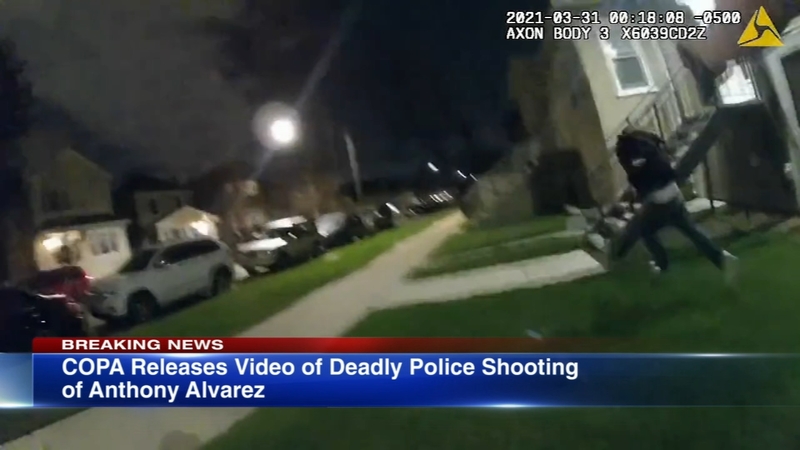 After releasing the footage, the Civilian Office of Police Accountability has recommended the officer who discharged his weapon, fatally injuring Anthony Alvarez, be relieved of police powers during the investigation.

The family of Anthony Alvarez is calling for justice.

The family viewed video of the shooting for the first time Tuesday, nearly a month after the shooting.

A Chicago police officer shot and killed Alvarez in a Portage Park alley on March 31.

His family watched the last minutes of Alvarez's life play out on video at the Civilian Office of Police Accountability, but said they still don't understand what led up to the deadly encounter with police.

"I want more answers," Alvarez's mother said in Spanish translated through his cousin, Isai Adame. "The videos I saw don't explain what I saw in the morgue. I want to know why they were running after him. To this day, I have no answers. I still want answers as to why they were chasing my son."

Alvarez's family arrived with their attorneys Tuesday to the Civilian Office of Police Accountability for the painful process of watching police body camera video of the fatal shooting.

"It is an absolute chilling scene," attorney Todd Pugh said after viewing the video.

The family of Mario Gonzalez, the man who died last week while in Alameda police custody, now say they believe the officers murdered him.

He said the video shows an officer shooting Alvarez in the back, as he was running away.

As they watched the footage, protesters gathered outside, demanding the name of the officer who shot Alvarez.

Police said officers were chasing Alvarez just before 12:20 a.m. on March 31 when Alvarez took out a gun, which turned into some kind of confrontation in the 5200-block of West Eddy. CPD said officers made verbal commands to Alvarez to drop a weapon before one fired his weapon several times.

Five shots were heard in the video.

Officers rendered aid on the scene, administering a tourniquet and CPR.

Alvarez later died at the hospital.

Police posted a picture on social media of the weapon they say they found at the scene.

"The rules of engagement are clear, and this officer followed them," Chicago FOP President John Catanzara said.

As the public waited to see video of another fatal police shooting, his grieving family said they want to know why this ever happened at all.

The video includes footage from officer-worn body cameras, video from a nearby gas station and clips from a doorbell camera, showing the moments before, during and after Alvarez was shot.

The Alvarez family's attorneys said in a joint statement with Mayor Lori Lightfoot the video's release "will be the beginning of a long process of healing for the family, and for all those who knew and loved Anthony."

The statement went on to say, "Both parties are acutely aware of the range of emotions that will accompany the release of these materials, and we collectively issue this statement and ask that those who wish to express themselves do so peacefully and with respect for our communities and the residents of Chicago."

The incident provides further motivation for the expediency for reform to the city's foot pursuit policies, the statement said.

In an unrelated press conference Wednesday morning, Lightfoot inferred that Alvarez's fatal shooting might have stemmed from a traffic stop.

He declined to comment on the nature of the incident.