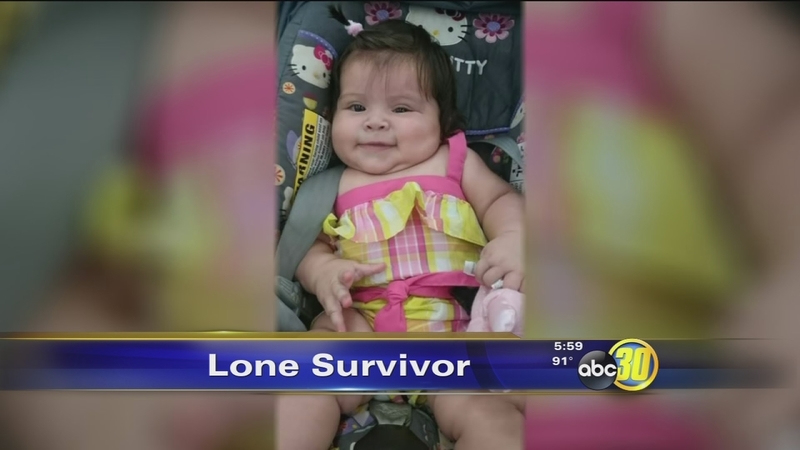 FRESNO, Calif. -- Family members are in mourning after a fiery crash in Fresno County left two people dead. There was only one survivor -- the couple's 6-month-old baby girl.

The child, named Ariana, was dramatically rescued from the scene by a Good Samaritan. Family members said they believe the baby's mother was also trying to save her child just moments before the car went up in flames.

The baby has been healing at Community Regional Medical Center. She's awake and seems happy. Family members said she's a beautiful reminder of her parents.

Ariana has bandages from severe burns on her arm and both legs. Still, even with the wounds, she seems happy.

"For Ariana, other than the netting everywhere, she looks like a healthy, happy baby," said Kristy Cagle, Ariana's cousin.

Cagle said that's all thanks to Jose Sanchez -- a man who lives near where her cousin's car crashed in Easton and saw the fiery scene early Friday morning.

"Our family is incredibly grateful for Jose Sanchez," said Cagle.

The baby was the only survivor in the car crash that killed her parents, Wendy Hancock and Gabriel Garcia. The couple was driving on the rural road at around 3:30 a.m. when they crashed into a pole.

"We don't know why they chose to leave at the time they did, but Gabriel and Alexis were at my aunt Denise's house, and they had to go to school the next morning, so Wendy had to be at that house by 6 or so to get them ready to go to school," said Cagle.

Hancock and Garcia also shared two other children -- 14-year-old Alexis and 12-year-old Gabriel Jr. Cagle said the devoted parents loved to laugh together. On Monday, Cagle spoke to Action News from her office, where she's an auto theft investigator.

"What I do for a living, I deal with car wrecks on a daily basis, and it didn't prepare me for this. It's definitely shocking," said Cagle.

Cagle said they believe Hancock in her final moments made a valiant move to save Ariana while their car was going up in flames. Hancock was the driver of the car that morning, but when officers found her, she was in the back seat.

"It's the only thing I can think of why she would have been in the back seat and how the baby ended up right next to the car, again not thrown from the car, but just I don't know if she put her out through a window or just had to get her out of there because the car was already on fire," said Cagle.