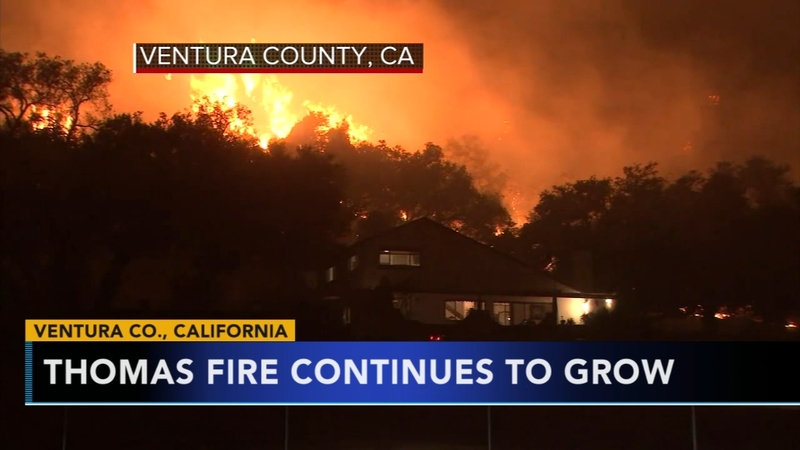 SANTA BARBARA, Calif. -- The fourth-largest wildfire in California history continues to grow and threaten thousands of homes despite armies of fire crews and fleets of bulldozers and aircraft.

Although Santa Ana winds eased on Friday amid the blaze northwest of Los Angeles, they are expected to return with a vengeance over the weekend. And the fire is so large that winds on one end may be gustier than those on the other side.

The 11-day-old Thomas fire surging through Ventura and Santa Barbara counties had devoured some 400 square miles (1,000 square kilometers) of brush and timber and burned more than 1,000 buildings, including well over 750 homes.

Another 18,000 buildings are still in jeopardy, including mansions in the wealthy enclave of Montecito.

The fire is only 35 percent surrounded despite efforts by some 8,000 firefighters, 32 helicopters and 78 bulldozers.

Santa Barbara has had only a tiny amount of rain since Oct. 1, the start of the new water year, and is more than 3 inches (7.6 centimeters) below normal to date.

The fire already has destroyed more than 1,000 buildings, including well over 700 homes, and threatens 18,000 more structures.

Another focus of firefighting was on the eastern flank in canyons where a state firefighter was killed Thursday near the agricultural town of Fillmore.

Officials have released no details on the death of 32-year-old Cory Iverson.

The National Weather Service forecast extreme fire danger or "red flag" conditions through at least Saturday evening, with winds gusting to 40 mph in the Santa Barbara County mountains where the fire is burning. Firefighters were facing first northerly "sundowner" winds through the night that could turn into northeasterly Santa Ana winds, driving the flames in another direction.

Everything about the fire was massive, from a footprint larger than that of many cities to the sheer scale of destruction that cremated entire neighborhoods or the legions attacking it: more than 8,000 firefighters from nearly a dozen states, aided by 32 helicopters and 78 bulldozers.