Art of Aging: Philadelphia Marathon runner pounding the pavement for over 50 years 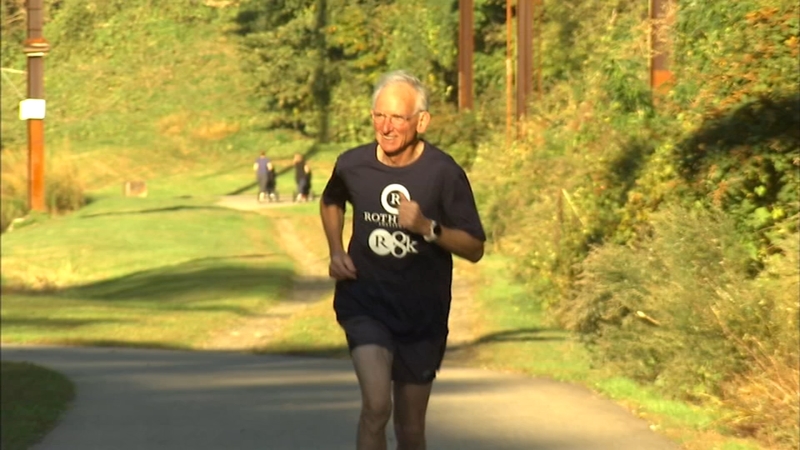 Art of Aging: Philadelphia Marathon runner pounding the pavement for over 50 years

BALA CYNWYD, Pennsylvania (WPVI) -- The Philadelphia Marathon, benefiting the American Association for Cancer Research, is coming up on Sunday.

And there's one local runner who has been pounding the pavement for more than half a century.

"I just decided to put on a pair of shoes and go out running one day," he said.

He says he only made it about a mile before he had to stop to catch his breath.

"But instead of making me want to quit, it made me want to keep going. And so I was just a happy, happy jogger," said Dykes.

It wasn't until 1997 that Dykes decided to enter a race, to check off a box on his bucket list.

"My first marathon was actually the Philadelphia Marathon, but I wasn't a runner then. I barely survived it," he said.

An injury in that race sidelined him for six years, but he says an inner competitiveness led him back to racing.

"So, it was after that injury subsided that I began my sort of modern modern career of running 15:01:25

"I finished third in my age group, it was at the Boston Marathon. That really got me excited," said Dykes.

Last year, he also beat the record for a 70-year-old runner at the Jacksonville Marathon.

This year, Dykes will again be running the Philadelphia Marathon, but also taking the freedom challenge, which includes two additional races.

"The Philadelphia Half Marathon and the Rothman 8k. I just couldn't decide which one to do," he said.

Dykes says running for this cause is important to him.

"Of the six in my immediate family, I'm the only one who hasn't had cancer. That's the most motivation I have for wanting to support cancer research," he said.

Dykes currently runs 40 to 50 miles a week as part of the schedule put together by John Goldthorp from Fix Your Run. They've been working together since 2013.

"He exceeded my expectations as well as his own, I think, so we've just continued to progress," said Goldthorp.

"You don't have to worry about anybody else, just beat that guy in the mirror. You're capable of more than you think you are," he said.
Report a correction or typo
Related topics:
health & fitnesscenter city philadelphiabala cynwydpennsylvaniahealthrunningart of agingphiladelphia marathondistance runningcancerfundraisermarathons
Copyright © 2022 WPVI-TV. All Rights Reserved.
TOP STORIES
What is monkeypox? What to know after US confirms 1st 2022 case
Delco bus driver accused of taking upskirt photos of students
Rise in brazen thefts force convenience stores to close
5 people shot in North Philadelphia near Temple University
Grand jury indicts man in Buffalo supermarket shooting
Newlyweds mark big day with fiery stunt
AccuWeather: From showers to sunshine
Show More
Oz, McCormick locked in tight race. Could a recount be triggered?
1st monkeypox case in US this year reported in Massachusetts
Biden invokes Defense Production Act for formula shortage
Red Cross registers hundreds of Ukrainian POWs from Mariupol
18-year-old dies after being trapped under sand at Jersey Shore
More TOP STORIES News