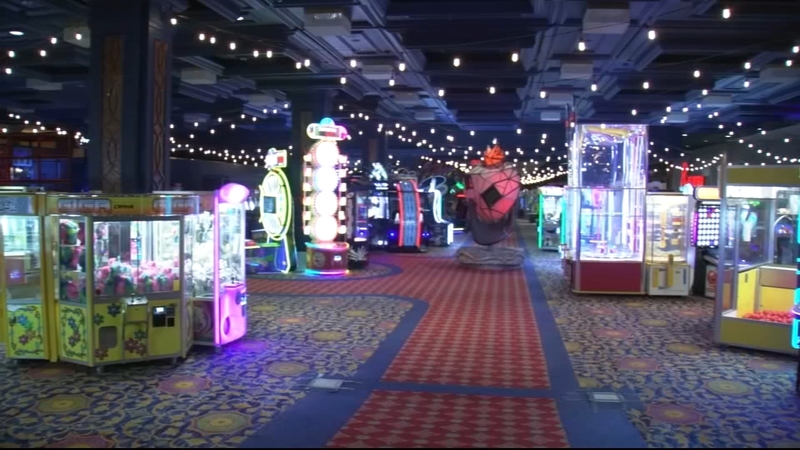 ATLANTIC CITY, New Jersey (WPVI) -- The Showboat Hotel in Atlantic City is being touted as New Jersey's largest arcade. You'll find Pac-Man, motorcycle racing and Halo where there used to be poker tables and slot machines.

"It's for everybody around. There's no place to go other than the casinos, which are great of course," said Tower Investments CEO Bart Blatstein. "But there's no place to go for other things. To hang out. To watch a game. To listen to music casually. To play in the arcade."

Owners say the new attraction, called Lucky Snake Arcade, will create 100 jobs and is set to open on May 15.

Showboat was a casino until it closed in 2014.

The shuttered Showboat casino hotel will reopen next month - this time as a non-gambling hotel, a developer said Friday.

It reopened as a hotel in 2016, and now developers are spending more than $7 million to create the arcade, sports bar and boxing ring, some of which are still under construction.

Late last year, the city approved plans for an indoor waterpark next to Showboat. Owners say that's expected to break ground next month and open for summer 2022.

This week, Caesars Entertainment announced it will invest $400 million into its Atlantic City Properties over the next two years, which include Harrah's and Caesars.

The first phase will include an overhaul of suites and guest rooms in time for this summer.

It's been a few months since the vacant Trump Plaza was imploded.

He also hopes a variety of new businesses in the city will mean more visitors.

"We're always going to be a casino town and we appreciate that," said Small. "They're our biggest employer, but it's time to turn the page to add more family attractions."