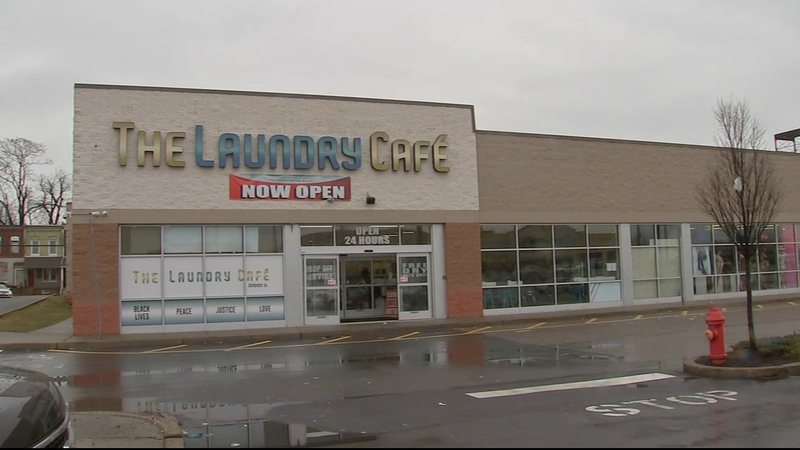 PHILADELPHIA (WPVI) -- An ATM was stolen from a laundromat in Philadelphia's Parkside section Monday, one week after another ATM was taken from a sister laundromat.

In the most recent case, the ATM had been bolted to the floor at the front of Laundry Cafe located at the Park West Town Center at Jefferson and 52nd streets.

"They took the entire ATM, so that's just bold in itself," said Josh Jackson, a customer.

An employee had been inside working when he heard something in the front of the store at about 4:15 a.m. When the employee saw the suspects, he left through another door and called police.

When officers arrived, they saw that the ATM had been removed.

"It's insanity, it's insane. You got to stop tearing up our neighborhood. You got to stop stealing. I know the struggle is real, and it is hard out here, but like this is a nice laundromat," said Sibyl Jordan, a customer.

It is the second Laundry Cafe where an ATM was stolen in a weeks time.

On February 22, at 2:15 a.m., suspects made off with an entire ATM at a Laundry Cafe in North Philadelphia.

One Parkside customer explains the laundromat opened within the last year and has been a wonderful addition to the community.

"It shouldn't be a target. No place should be a target. You have internet access, you got a children's study area," Jordan said. "It's a nice, clean, safe laundromat."

No word yet on how much was taken. No one was injured in either crime.

There are surveillance cameras, but no video has been released.
Report a correction or typo
Related topics:
philadelphiacrimetheftlaundromatphiladelphia police
Copyright © 2021 WPVI-TV. All Rights Reserved.
More Videos
From CNN Newsource affiliates
TOP STORIES