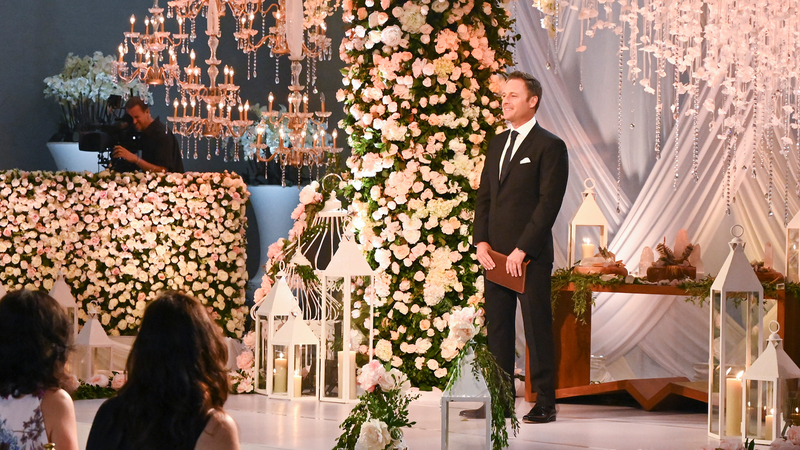 LOS ANGELES -- Love may come and go, but the one constant we can always count on is "Bachelor" host Chris Harrison telling us that "this will be the most dramatic season yet." As the host of the "Bachelor" franchise since 2002, Harrison has essentially become the face of love nationwide. So, it's no surprise that fans want him to be a part of their romantic milestones as well.

After getting ordained to marry producers of the show in 2012, demand soon spiked for Harrison's services. "Bachelorette" season seven contestants Ashley Hebert and J.P. Rosenbaum asked Harrison to officiate their wedding on the show, and thus began the tradition of "Bachelor" franchise weddings.

Harrison has since married several couples that met on the franchise and has even helped out fans.

"Fans have reached out to me," Harrison explained. "I have done a few. I've helped with proposals, engagements, and [other] moments."

However, the host was disappointed that he couldn't reach everyone. So, he created a safe and easy way for every fan to reach him.

"Bachelor Nation, you know I love connecting with you and appreciate being part of the love in your lives," Harrison captioned his Instagram announcement of ChrisHarrisonOfficial.com.

"My team is now swamped and inundated with proposals and engagements," Harrison revealed.

While Harrison is willing to travel for events (even internationally), he is also happy to host weddings at a very famous location: the "Bachelor" mansion. Fans can even request to book the Villa de la Vina mansion in Malibu through Harrison's website.

Hiring Harrison does come at a price, though. If fans can't afford to have him officiate their weddings, they can request a personalized video from him to play on their special day.

For those who aren't tying the knot anytime soon, Harrison has something for them too. Via his website, people can also book the host to emcee events, corporate functions, collaborations and endorsements.

"I'm kind of the face and the voice of the show and I'm blessed to be that person," Harrison said.

Now, the famed host just wants to spread the love that fans have shown him over the years: "How fun will that be if I stand in front of two fans of the show and make this happen?"
Report a correction or typo
Related topics:
arts & entertainmentbachelor in paradiseromancebachelorweddingchris harrisonbachelorettereality television
Copyright © 2022 OnTheRedCarpet.com. All Rights Reserved.
BACHELOR
'Bachelorette' contestant Clint Arlis dies at 34
See the full cast of Clayton's season of 'The Bachelor'
7 things to know about your new 'Bachelor' Clayton Echard
Jesse Palmer set to host 'The Bachelor'
TOP STORIES
AccuWeather: Nor'easter could bring heavy snow to region
Police: Delivery driver shoots attempted carjacker 6 times in Philly
5-year-old boy found by good Samaritan after boarding wrong bus
Woman found bludgeoned to death inside New Jersey home
Winter storm: Jersey Shore bracing for more than a foot of snow
Surveillance video shows altercation that led to Coatesville shooting
Drexel Wrestling Team is full of brotherly love
Show More
Delco man lucky to be alive after hit-and-run outside home
Toddler credited with saving family of 7 from devastating house fire
'The Ice Age Adventures of Buck Wild' heading to Disney+
3 charged in assault of NJ man before he went missing
Student burned inside Chester County learning center
More TOP STORIES News