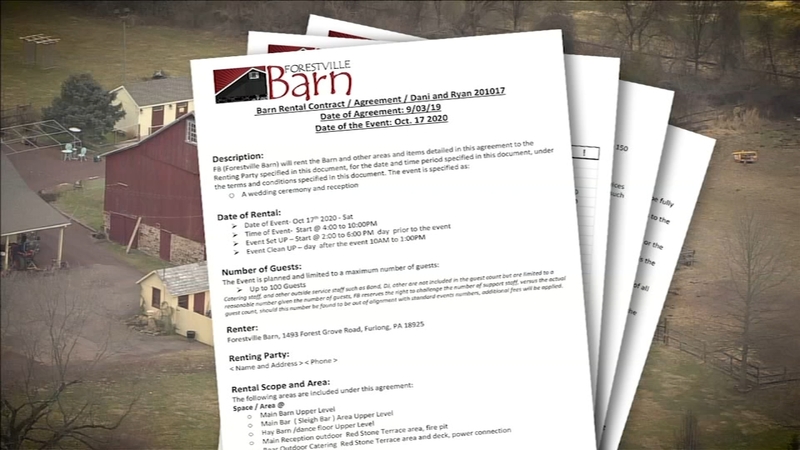 BUCKINGHAM TWP., Pennsylvania (WPVI) -- The number of complaints against a Bucks County wedding venue that abruptly closed, leaving brides-to-be without their deposits or a place to get married, has nearly tripled.

The Buckingham Township police department said earlier this week it was looking for people who lost deposits after booking an event at The Barn at Forestville.

Since then, the number of complaints jumped from four to about a dozen.

When the Action News Troubleshooters talked to one bride-to-be on Monday, she was distraught and desperate.

Police investigating after closure of The Barn at Forestville wedding venue | January 13, 2020

"The day that I found out he was potentially closing is the day I opened my wedding invitations in the mail," said Danielle Strassel of Furlong, Bucks County.

Strassel said last September, she and her fiancé paid the owner of the Barn at Forestville in Furlong, Bucks County, a $2,000 deposit for their October 2020 wedding. She said at the time there was no warning from him that the venue might close.

"I think it's really deceitful," she said. "Nobody wants to go through that so I think it's awful he didn't disclose any information."

It turns out, owner Lonny Plummer took their money knowing the venue might close due to zoning issues and The Barn did subsequently shut down due to a court order on December 31st. Strassel told the Troubleshooters on Monday Plummer offered the couple a refund months ago, but even after multiple promises the money had yet to materialize.

"He said the check got lost in the mail, then he said he didn't have the money," Strassel said.

We went to the Barn at Forestville but instead of getting answers, we got kicked off the property.

But on Wednesday Plummer did talk over the phone. He said, "We had every intention of honoring our agreements going into 2020 and 2021 and then the court closed us down."

The good news for Strassel? The day after the Troubleshooters aired her story she got her money back, a full refund of $2,000.

"I feel awful for all the people that probably have given him even more money than we did, who made several payments to him so I just hope this can all be resolved," said Strassel.