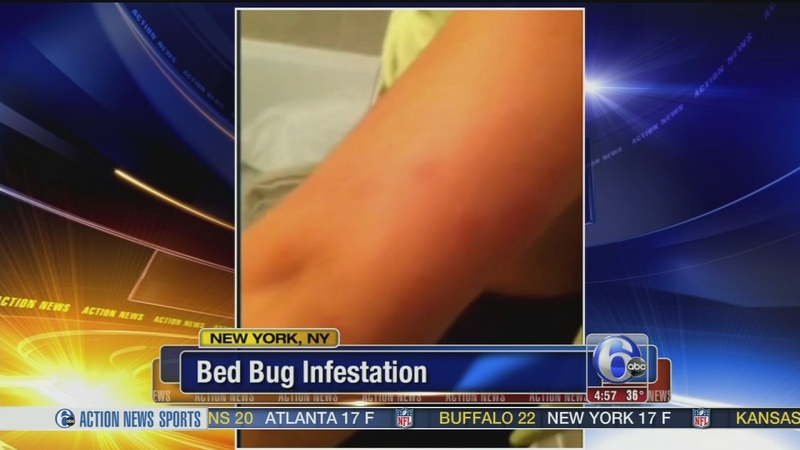 NEW YORK CITY (WPVI) -- A couple from California thought they were on a dream vacation to New York City, but they found a massive bedbug infestation under the mattress at the Astor on the Park Hotel on the Upper West Side in Manhattan.

The trip was a gift from Elgin Ozlen's mother, and the couple was supposed to take in the sights and sounds of the city, and see the ball drop on New Year's Eve in Times Square. However, because of the bedbugs, Ozlen says it will be a trip that he and his girlfriend will remember for all the wrong reasons.

A couple from California says bed bugs ruined what was supposed to be their dream vacation in New York City.

After staying in a hotel room infested with bedbugs, the dream vacation immediately turned into a nightmare.

Ozlen says he shot video of the infestation, while staying at Astor on the Park on Central Park West. The couple arrived on Wednesday, and by Thursday, there was an infestation of bedbugs where Ozlen's girlfriend slept. Ozlen then goes on to say that the room was the third room the couple had been in, after the first two did not have heaters.

The California man says they had planned to be in Times Square to see the ball drop, but that never happened. Also, on New Year's Day, his birthday, they had tickets to see the Rockettes, but instead there was a change of plans.

"On my birthday, I'm in the hospital, and I'm washing the best clothes that I brought that I own for this vacation, and during that process many of the clothes became damaged, because they're not meant to be dried," Ozlen says.

It cost hundreds of dollars to have the couple's belongings cleaned. Meanwhile Ozlen says his girlfriend's body is still inflamed, saying she is furious that the bites and scratches may lead to permanent scarring.

He also says she can't eat because she is nauseous, but she is not the only one.

"It's disgusting. I don't really feel like sleeping here," said one hotel guest.

Katie Phillips, a tourist from Australia has been staying at Astor on the Park for a week, and says her stay has been 'near perfect' - a clean room with no complaints. After seeing the bedbug video, she says it was 'pretty disturbing'.

"If we had seen that a couple of days ago, we probably would have checked out and gone and stayed somewhere else," says Phillips.

Our sister station, WABC in New York, tried to reach out to the Astor on the Park Hotel, but they declined to comment. The Department of Housing has not yet released a statement.

Ozlen says the hotel was apologetic, and they did refund him, but he says it is not about the money. Instead, he says it is about the memories that he came for that he never got, and the memories that he is now stuck with.
Related topics:
hotelu.s. & worldbugsbedbugs
Copyright © 2021 WPVI-TV. All Rights Reserved.
TOP STORIES
6-year-old girl at center of Amber Alert in Philly found safe
School director arrested for failing to report child abuse: DA
3 injured after shooting inside Philadelphia bar
Major outage at Amazon disrupts businesses across the US
Pfizer says COVID booster offers protection against omicron
Armed thief targets Latino-owned businesses in Hunting Park
AccuWeather: Scattered snow flurries today
Show More
Norristown firefighters honored for heroism during Ida
No charges in Easton school bus crash: DA's Office
NASCAR champ presents $100K check to Philadelphia school
Pa. mom gives second chance to dozens of foster children
How to avoid losing hot holiday items to online bots
More TOP STORIES News