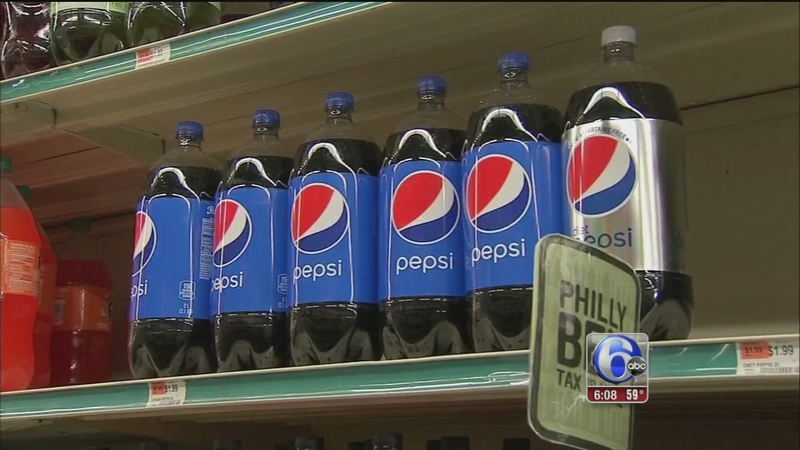 PHILADELPHIA (WPVI) -- PepsiCo says it will stop selling six-packs and 2-liter bottles in Philadelphia, and they're blaming this drastic change on the city's new beverage tax.

Shoppers we spoke with on Tuesday don't blame them.

"I will not buy anything with it for it. I'm not buying no sodas, it's ridiculous," Roseann Fudala of Rhawnhurst said.

"If I'm out of the city, I will go and purchase soda just for a treat, but I won't buy it in the city," Christine Sokol of Fox Chase said.

Maria Koutsouradis of Bell's Market in Rhawnhurst says they recently received a letter from PepsiCo detailing the decision, part of it reading:

"Because of the Philly Beverage Tax, people are buying far fewer taxed beverages - particularly those in larger package sizes because they now cost so much more."

So PepsiCo has decided to pull them from the shelves.

As a result, Koutsouradis says the loss of product will lead to fewer shoppers at her store.

"If a customer chose to go outside of the area, they would get their 12-pack and get it a lot less expensive, they would also pick up other items while they're there," Koutsouradis said.

Pepsi says their products will still be available in the city, but in smaller amounts.

Meantime, Coca-Cola also says it's focusing on smaller sized products within the city.

"We've been offering smaller packages across the country - and here in Philadelphia - not because of cities passing beverage taxes, but because they're what people want," aid Fran McGorry, president and general manager of Coca-Cola Refreshments' Tri-State Metro Operating Unit, also known as "Philly Coke". "But these steps also are helping our customers navigate the business challenges presented by this tax and helping make our products affordable for consumers."

In response, the city defended the Beverage Tax, saying in part: "Pepsi's reasoning for their layoffs and for no longer distributing certain beverage sizes is all self-reported by a company that is actively fighting to overturn the beverage tax in court."

PepsiCo says this move will take effect March 20th. Since we've passed that date, that means once these items sell out of stores in the city, they will not be restocked.