Montco DA: Cosby's release is "irrelevant to the facts of the crime" 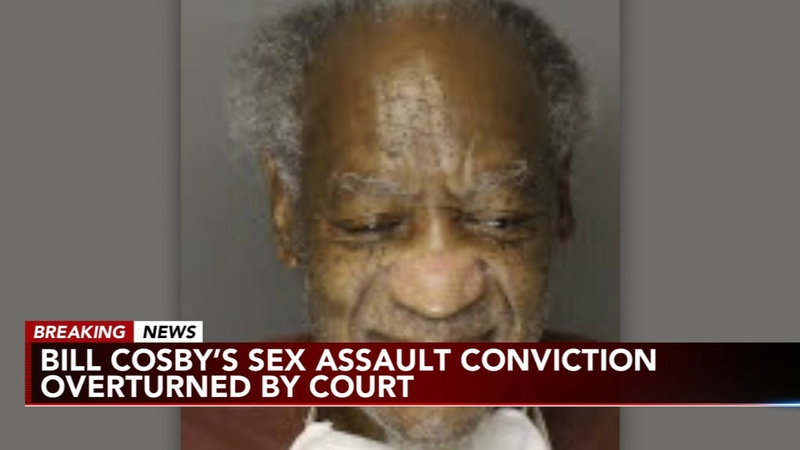 NORRISTOWN, Pennsylvania (WPVI) -- The district attorney of Montgomery County, Pennsylvania - where Bill Cosby convicted of sex assault in 2018 - is reacting to that conviction being overturned.

"He was found guilty by a jury and now goes free on a procedural issue that is irrelevant to the facts of the crime," D.A. Kevin Steele said in a statement. "I want to commend Cosby's victim Andrea Constand for her bravery in coming forward and remaining steadfast throughout this long ordeal, as well as all of the other women who have shared similar experiences."

"My hope is that this decision will not dampen the reporting of sexual assaults by victims. Prosecutors in my office will continue to follow the evidence wherever and to whomever it leads. We still believe that no one is above the law-including those who are rich, famous and powerful," added Steele.

Bill Cosby was arrested in the twilight of his life and career Wednesday.

Cosby, 83, has served more than two years of a three- to 10-year sentence after being found guilty of drugging and violating Temple University sports administrator Andrea Constand at his suburban Philadelphia home in 2004. He was the first celebrity tried and convicted in the #MeToo era.

The former "Cosby Show" star was arrested in 2015, when Steele, armed with newly unsealed evidence - the comic's damaging deposition testimony in a lawsuit brought by Constand - brought charges against him days before the 12-year statute of limitations ran out.

But the Pennsylvania Supreme Court said that Steele, who made the decision to arrest Cosby, was obligated to stand by the promise of former D.A. Bruce Castor's promise not to charge Cosby. There was no evidence that promise was ever put in writing.

Justice David Wecht, writing for a split court, said Cosby had relied on the former district attorney's decision not to charge him when the comedian gave his potentially incriminating testimony in the Constand's civil case.

The court called Cosby's arrest "an affront to fundamental fairness, particularly when it results in a criminal prosecution that was forgone for more than a decade."

The justices said that overturning the conviction, and barring any further prosecution, "is the only remedy that comports with society's reasonable expectations of its elected prosecutors and our criminal justice system."