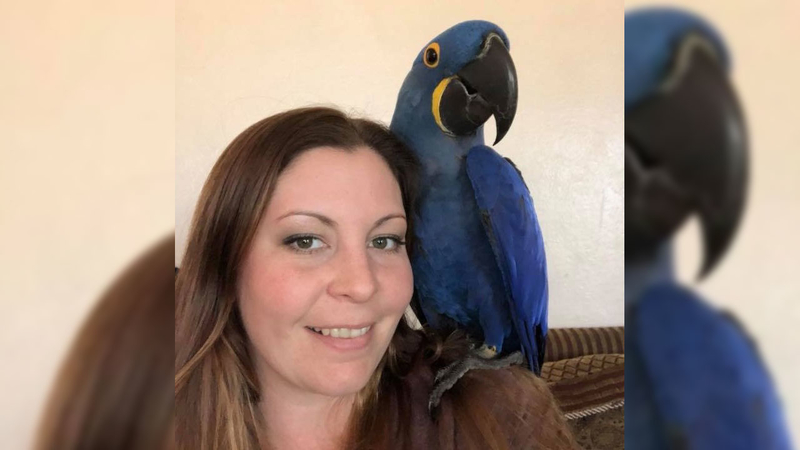 SAN JOSE, Calif. (WPVI) -- A San Jose woman went on the search of her life after her beloved and ultra-rare exotic bird, Blu, went missing after a routine grooming.

For 12 hours a day, in the dreary on-and-off rain, Jessica Hagan and her friend Sarah have been scouring the streets of San Jose. Posting flyers and calling out.

The duo are looking for Blu, a rare three-year-old Hyacinth Macaw. A gift from Jessica's boyfriend, blue is a parrot she calls her "dream bird."

"He's actually the best thing that's ever happened to me," says Jessica, with tears in her eyes.

These stunning blue parrots are endangered in the wild and so sought after, can be valued at upwards of $15,000. For Jessica, losing Blu during a wing and nail trim is more than she and her family can bear.

"There's no value for him. He's irreplaceable," says Jessica as she shakes her head sadly.

The grooming was to take place at Andy's Pet store. A place where Jessica has been coming for years with other pets. Ironically, Blu's scheduled wing trim was to prevent him from flying away. But as the groomer carried the majestic creature through a plastic partition, Blu got spooked and flew out the back door.

"I feel horrible. Just so horrible," says Anbolin "Zoe" Zamora, who works at Andy's and was caring for Blu.

"...like, I was about to puke my heart dropped," she continues.

While Anbolin admits things could have been handled differently, she and Jessica have been friends for years-and mutually acknowledge the mistake.

"People are always going to blame somebody," she says.

There were fears Blu would show up on the bird black market, resold to a pet store or on a third-party website like Craigslist.

But in a twist of fate, shortly after we finished shooting this story, out of the blue-- pun intended-- we got a call from Jessica with the good news.

Blu had been spotted at a nearby apartment complex. A bit weary and shaken but on the mend and back where he belongs.
Report a correction or typo
Related topics:
pets & animalscaliforniasearchbirdslost pet
Copyright © 2022 WPVI-TV. All Rights Reserved.
TOP STORIES
30th St. Station worker recalls stabbing: 'I sprayed him with Windex'
Mom hears late son's heartbeat in 14-year-old boy for 1st time
US to release monkeypox vaccine from national stockpile: CDC
Brendan Langley, fmr. NFL player, gets in scuffle at NJ airport
McCormick sues over counting mail ballots in Pa. Senate race
NFL QB Dwayne Haskins legally drunk when he was hit, autopsy shows
3 teens injured in shooting near school in Tioga-Nicetown
Show More
Man stabbed in Northern Liberties, police say
AccuWeather: On The Cool Side
Bruce Springsteen and E Street Band to tour in US, Europe
Philly musician pays tribute to Korean-American heritage
Chickie's & Pete's to pay your tolls on AC Expressway
More TOP STORIES News