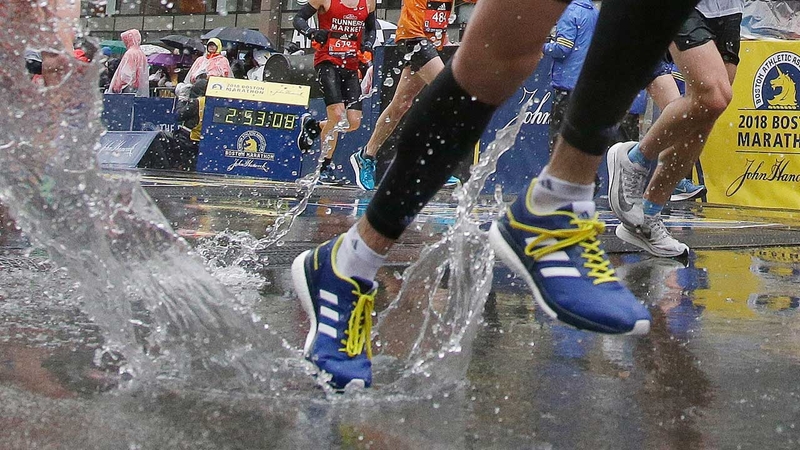 Monday is Marathon Day in Boston, and just like last year, runners may have to trudge through wet weather to make it to the finish line, but this year is expected to be warmer.

Here's what you need to know about the race.

The runners take off in waves beginning just after 9 a.m. ET. The waves will continue to start the race until the last wave leaves at 11:15 a.m. ET.

A year after temperatures dipped into the mid-30s and runners battled a near-gale headwind that blew a pelting rain into their faces, race organizers are again preparing for the some of the foulest weather the city has to offer.

Early forecasts called for conditions similar to 2018, when there was a record number of dropouts and Japan's Yuki Kawauchi finished in 2 hours, 15 minutes, 58 seconds - a time that wouldn't have been fast enough to win any race since the sweltering 1976 "Run for the Hoses."

On Monday morning, the marathon confirmed they are expecting warmer but wet conditions for the race.

What's your prediction for today's winners and winning times?

Or tag a friend you are cheering on!📣

Among the big names in the race is NASCAR's Jimmie Johnson, who just raced in the Monster Energy NASCAR Cup Series on Saturday night.

Olympic gymnast Shawn Johnson East had planned on running the marathon with her husband NFL player Andrew East. Shawn decided not to run because she is pregnant, but she shared on Instagram that she was excited to cheer on her husband.

Monday also marks the anniversary of the 2013 race when three people were killed and dozens injured by a terrorist bombing attack. A police officer was killed days later during the manhunt for the terrorists.

Since the bombings, the city has honored the victims on April 15 with a day of service known as One Boston Day. This year marks the first time that the race, which is always held on a Monday, falls on the anniversary.

At 2:49 p.m. ET, the same time that the bombs went off, church bells will toll to remember the victims. The Red Sox will also hold a moment of silence before their game today.