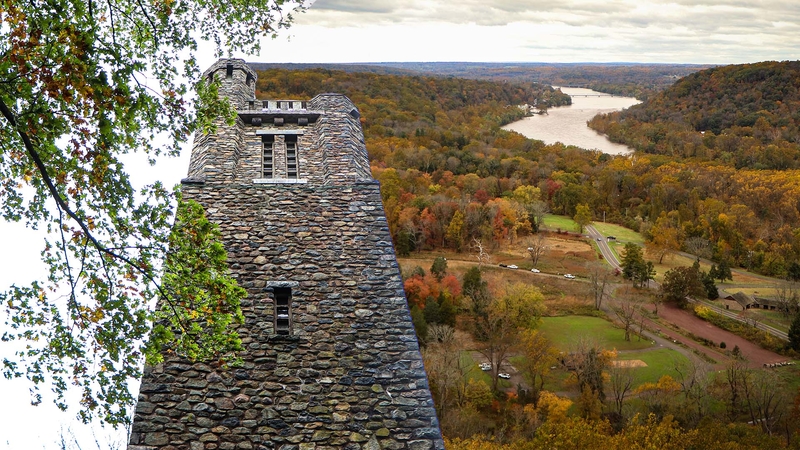 "The view is wonderful. And the history of it is really great, too," said Jackie Strohlein, who has climbed the 125-foot tall Bowman's Hill Tower.

Built between 1929 and 1930, the stone structure was meant to honor George Washington's crossing of the Delaware River during the American Revolution. During the barren winter, troops would have had a clear view from the top of the hill.

"We believe they used the hill as a lookout," said Gaetano Sava, the Visitor Services Coordinator with the Friends of Washington Crossing Park. "That's why they built a tower up here, to commemorate the crossing and serve as a modern equivalent of the lookout that those troops may have had back then."

The tower is a part of Washington Crossing Historic Park in Pennsylvania. On a clear day, its view offers more than 10 miles of scenery in every cardinal direction. The Delaware River's bending shape can be admired from this bird's eye view. Particularly during the peak of fall foliage, families flock to the top floor to see a sea of red, yellow, and green colors popping from the trees.

Many locals have made a tradition out of visiting the tower for decades.

"First time I came up here, I was a teenager," said Marion Hickman from Fairless Hills. "A lot easier going up the steps then."

The architecture of the tower demands that guests climb several flights of spiraling steps. An elevator typically brings guests 3/4ths of the way up, but it is currently out of service. Thus, eager sightseers will have to reach the pinnacle of the tower on foot.

Among the many sights viewed from the tower, the entrance to Bowman's Hill Wildflower Preserve can be surveyed. Also created in the 1930s, the preserve is an equally enchanted sight during any season of the year.

"We are the only accredited botanical museum in the country solely dedicated to native plants," said Santino Lauricella, the Education Coordinator. "The preserve itself consists of about 134 acres, 100 of which is contained with inside a deer-exclusion fence."

The preserve has gone great lengths to protect those native plants and allow them to grow in the most natural way possible. It is also home to a great deal of programming including yoga, forest therapy, and more. During the growing season, they also sell various types of plants to regular guests and members alike.

Even first-time visitors are enthralled by the winding paths painted by nature's favorite colors.

"It's got all these little nooks and crannies, which is pretty cool," said Joann Sulak from Hatfield, Pennsylvania. "And it's so natural, you know, they leave it in the natural habitat."