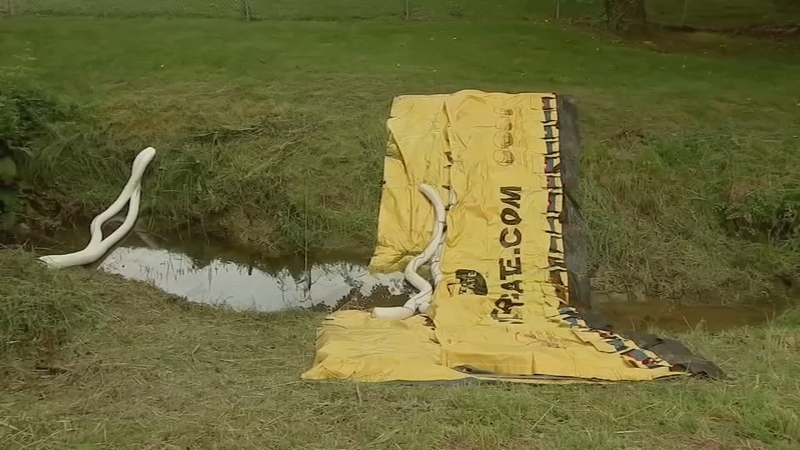 BROOKHAVEN, Pennsylvania (WPVI) -- A major fuel spill in Delaware County is forcing some students to make a big change as the school year winds down.

The odor of the gasoline will keep Coebourn Elementary in Brookhaven, Pa. closed for the rest of the week, officials announced Tuesday.

Students will now have to finish the last three days of school virtually, according to Penn-Delco School District Superintendent George Steinhoff.

"We understand that once they start the remediation and clean up process, it's going to push up fumes, winds can shift and we could suddenly have a scenario where the kids just don't feel well," Steinhoff said.

Steinhoff said they're expecting to hold the kindergarten graduation Wednesday morning in one of the municipal buildings across the street from the school.

"It's hard to believe that whoever did this, or is responsible, didn't know and didn't report it in time," the director of emergency services said.

Emergency cleanup crews are still working to make sure fuel from the spill doesn't travel out of smaller waterways in Brookhaven after Monday night's heavy rain.

"The rains last night certainly exacerbated the problem. Some of the fuel was higher up on the banks, so it washed down as it came in," said Tim Boyce, Delaware County Emergency Services Director.

Officials said they're working to determine exactly how the rain potentially affected the movement of fuel runoff.

The fuel is currently contained to streams and retention ponds in the area, and the goal is to make sure the fuel doesn't reach the nearby Chester Creek or the much larger Delaware River. Officials said barriers are in place to help prevent that from happening.

The spill happened Friday night at the Gas N Go gas station, which is located at the intersection of Coebourn Boulevard and Edgmont Avenue.

"Obviously, this was not a minor event. It was a catastrophic release," Boyce said.

They're estimating anywhere between 4,000 to 4,500 gallons of fuel possibly contaminated the environment during the spill.

When it comes to who's responsible, investigators are still trying to get to bottom of why the spill wasn't reported until eight hours after it happened.

Lee Transport Systems, the company that owns the tanker truck that made the delivery, tells Action News the company has hired a third-party group to do its own investigation on the root cause of the spill.

"The plan is that we will spend all the money necessary to make the area safe and then go after recovery later. We don't wait for funding to come in to make sure the community is safe, but somebody is going to be responsible for the cost," Boyce said.